US$78
View deal
Free cancellation until 28/10/21
Hotels.comUS$79
HiltonUS$79
PricelineUS$79
View all 18 deals
Prices are provided by our partners, and reflect nightly room rates, including all taxes and fees known to our partners. Please see our partners for more details.
Payments made by partners impact the order of prices displayed. Room types may vary.
Paulo F
Manchester, United Kingdom
32

Stayed here 2 nights, was really impressed with the Hotel - Great Service and beautiful place/ A bit expensive but the 5 stars means that !!!
The only problem I found its the taxi provided by the Hotel to be too expensive. I've paid 35,000 Rubles for a taxi from the Hotel to the Airport ( 55 Rubles aprox = 1 pound ) . Again would be much cheaper if I could speak russianMore

Thank you for your 5-star review of our property. We are very pleased to read that you were really impressed with our great hotel. We are so sorry that you found the taxi service in Moscow too expensive. We officially confirm that the hotel taxi rate to/from any airport: Sheremetyevo, Domodedovo, Vnukovo, is 3,000 rubles. Unfortunately, we cannot take responsibility for any taxi services provided by the third parties. We look forward to seeing you again soon and thank you for your feedback.

Report response as inappropriateThank you. We appreciate your input.
This response is the subjective opinion of the management representative and not of TripAdvisor LLC
See all 2,908 reviews
Payments made by partners impact the order of prices displayed. Room types may vary.
Nearby Hotels

Expedia.com
View deal
Free cancellation
Reserve now, pay at stay
Booking.com
US$38
Hotels.com
US$42
Agoda.com
US$38
View all 9 deals from US$38
1 review

Taking safety measures
We compared the lowest prices from 9 websites

Expedia.com
View deal
Pay up to 12X
Booking.com
US$63
Official Hotel
US$57
Hotels.com
US$66
View all 17 deals from US$57
1,630 reviews
3.4 miles from Hilton Moscow Leningradskaya
We compared the lowest prices from 17 websites 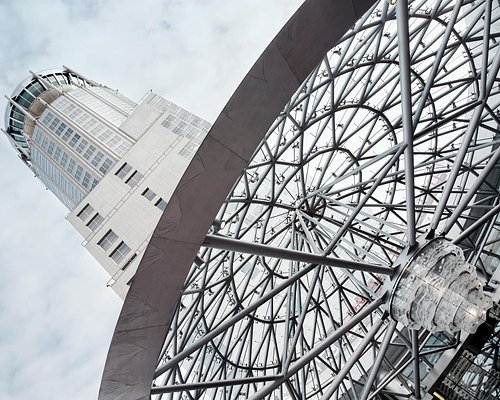 Taking safety measures
We compared the lowest prices from 17 websites
Peter I Hotel
US$121
Booking.com
View deal
Expedia.com
US$156
Agoda.com
US$69
Hotels.com
US$156
View all 15 deals from US$69
825 reviews
1.5 miles from Hilton Moscow Leningradskaya

Expedia.com
View deal
Pay up to 12X
Booking.com
US$53
Tripadvisor
US$53
Radissonhotels.com
View all 16 deals from US$53
1,696 reviews
3.9 miles from Hilton Moscow Leningradskaya

Expedia.com
View deal
Pay up to 12X
eDreams
Trip.com
US$28
Hotels.com
US$42
View all 16 deals from US$28
2,327 reviews
4.0 miles from Hilton Moscow Leningradskaya
We compared the lowest prices from 16 websites
Beta Hotel Izmailovo
US$33

Good hotel in one of the " 7 sisters" , one of the 7 skyscrapers build by Stalin (I understand number 8 was shipped and build in Warsaw).

Beautiful interior, friendly and helpful staff. The restaurant staff was a bit too eager in my opinion. Room on 18th floor - with a nice view over the city. Room was very roomy, with a U layout, with bathroom in the middle. Semi separated bed area and large desk. Executive lounge on 6th floor serves a good breakfast and tasty canapes during evening drinks.

Gym is ok, enough equipment, but feels a bit cramped.

As always - no free internet, which I think is still a miss for any hotel.

Thank you for your time and positive comments about the hotel. We are so pleased to hear that you found our staff friendly, guest room cozy and breakfast tasty. We look forward to welcoming you again soon and hope that you will take advantage of our free Wi-Fi offered to all hotel guests in Lobby Lounge and Janus restaurant.

Report response as inappropriateThank you. We appreciate your input.
This response is the subjective opinion of the management representative and not of TripAdvisor LLC
Corinne F
Canton of Basel, Switzerland
4421
Reviewed 13 November 2012
Good Hotel

The Hilton Moscow is a big luxury Hotel with large, clean rooms and a wonderful executive lounge.
Stayed in room 1904 and the view was fabulous.

Staff are friendly could be more helpful. The location of the Hotel wasn't that great, not much around, a few shops, restaurants and train station, but I couldn't hear any city noise in the Hotel room which was great.
All in all a nice Hotel, wish the staff would have been more helpful.

Thank you for taking the time to review your stay with us. I am so pleased that you enjoyed our clean comfortable rooms and fabulous view over the city. We are sorry to hear that you found our team members less helpful than you expected. We will use your review to improve our training programs. We look forward to seeing you again.

Report response as inappropriateThank you. We appreciate your input.
This response is the subjective opinion of the management representative and not of TripAdvisor LLC
StefanoR69
Carouge, Switzerland
10471
Reviewed 9 November 2012
Moscow

perfect hotel for a weekend in moscow....do not be afraid if this is not central located. The hotel is clean, quite and service ir outstanding. I did enjoy HH diamond member benefits and executive room are the perfect to recover after a long day in town

This review is the subjective opinion of a Tripadvisor member and not of TripAdvisor LLC.
NataliaSnow
St. Petersburg, Russia
3194
Reviewed 8 November 2012
Business Trip Stay in Moscow

I have recently stayed at Hilton-Leningradskaya (Moscow, Russian Federation) for business.
The high standards of Hilton hotels are well known all over the world.
I would like to highlight the following advantages among others:
Environment: the hotel has been transformed to a luxury one from an old-fashioned Soviet style hotel.
I know that many expatriate tourists would like to find themselves in a kind of Soviet Epoch atmosphere.
The rooms are totally renovated. I liked that there is a hi-fi music-center installed in the room and a guest has a possibility to listen to a great variety of radio stations up to his/her taste.

Location: the hotel is situated near the so called “Square of three railway stations”, just a minute walk from the metro station “Komsomolskaya” (circle and red lines) that is of great convenience taking into consideration permanent traffic jams in the center of Moscow.
The station itself is considered to be a masterpiece and worth seeing.
When choosing the red line, it is just several minutes ride to the key places of sightseeing:
Metro Station “Okhotniy Ryad” - Red Square;
Metro Station “Vorobjovi gory” / “Universitet” - Moscow State University with a magnificent view from the Vorobjovy mountains / Sparrow Hills (Russian: Воробьёвы го́ры), known as Lenin Hills (Ле́нинские го́ры, Leninskiye Gory), one of highest points in Moscow;
Metro Station “Tchistiye Prudi” - to have a walk around the Clean Ponds (Russian: Чистые пруды, Chistye Prudy), to enjoy wonderful atmosphere of joy with aroma coffee and yummy dessert at a cute café called “Schastje” (Happiness) at Pokrovka street 15/16 (www.schastye.com) or at to taste mouthwatering bakery and bread shop at Pokrovka street 14/2 ( www.karavaevi.ru)

Breakfast: as everywhere at Hilton the breakfast is rich and is arranged in a spot with high ceilings (as part of Stalin-like building style) that creates specific atmosphere.
The level of service is quite high.

Prices: the prices are quite high, but Moscow is an expensive city - be prepared for it. In case on-line booking beforehand with no refund the prices are quite attractive. Might be nearly the same as at some 3-star hotels. But the service at Hilton is much more higher.

I enjoyed my stay at Hilton Leningradskaya and would give it 10 points out of 10.

Room tip: The facade of the hotel looks the so called "Square of three railways" that is quite a busy spot. The windows are thick and defend from the outside noise. In case you like to see the busy atmospere of the railway stations, choose the room with the direct view. I preferred a side room with the view to the Ostankinskaya bashnya (tower) and liked it a lot.
Ask NataliaSnow about Hilton Moscow Leningradskaya
Thank NataliaSnow

This review is the subjective opinion of a Tripadvisor member and not of TripAdvisor LLC.
handycrafter77
Los Angeles, California
1950
Reviewed 8 November 2012
Lovely room

I stayed in this hotel in late August of 2012 for 4 nights and I thought the room was big, my bathroom was big too and the breakfast was great. 2 different subways were walking distance and I thought the area was pretty safe. There are some restaurants nearby and cellphone stores (came in handy for me). I had a couple of issues with my room because I couldn't make outside calls and always had to go down to the business center or front desk to call out and also at first didn't have internet in my room so I had to go down to the lobby. Internet issue got fixed within 1 day, but the calling out issue never got fixed. I also got stuck in the elevator twice, while I was alone so it freaked me out a bit. Other than these issues, my husband and I loved our stay and our room. I will say though that I love walking around discovering and exploring new restaurants and streets so if you're the type that wants something centrally located in the smack middle of tourist then this is probably NOT the hotel for you. There are several nearby restaurants and local shops, but not exactly touristy type. If going to the Kremlin, it's best to catch the subway up north some 4 blocks away. There is a subway station right in front just about 1 block and half away, but that one doesn't take you straight to the kremlin and you'll have to catch several to get to the Kremlin so might as well just walk a couple of blocks and just take 1 straight.

Thank you for detailed description of your last stay in our hotel. We are very happy to hear that you loved our spacious guest rooms, great breakfast and took advantage of two different metro stations in walking distance from the hotel. I am so sorry that you had an issue with outgoing telephone calls and elevator because this situation is an atypical one for our property. Therefore, we will make sure that our engineering department is aware of your review. I truly appreciate your feedback and look forward to seeing you again.

Report response as inappropriateThank you. We appreciate your input.
This response is the subjective opinion of the management representative and not of TripAdvisor LLC
View more reviews
PreviousNext
1…180181182…