“Weekend retreat”
MHBTXzYyXzZGTA==
other travellers have booked this property

Review of Rosan The Annexe, quiet and very comfortable, Home from Home! 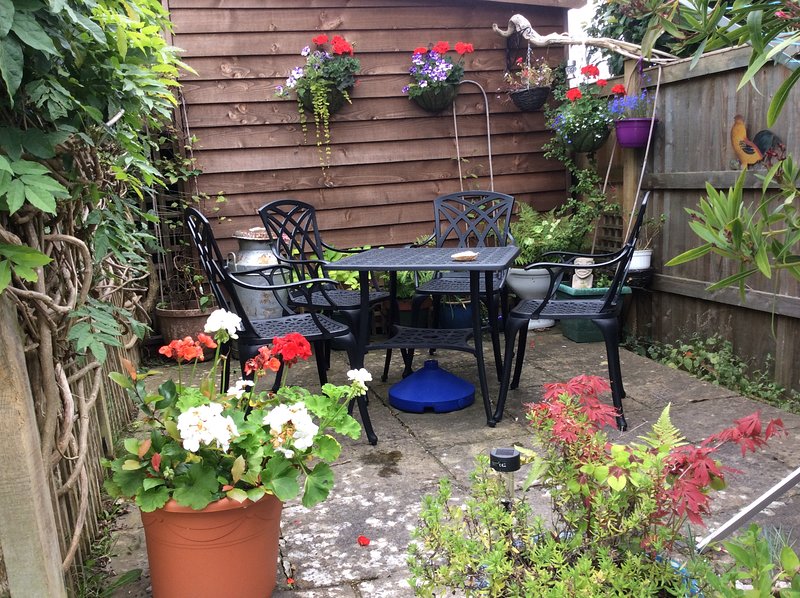 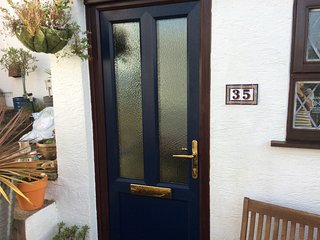 Very good - based on 42 reviews
Write a Review

Rosan The Annexe is situated in a quiet street a mile from the seafront at Lyme. It appears to be a converted garage and is on two levels, the kitchen and bathroom a couple of steps higher than the living/dining/bedroom area. There is a sliding patio door to the rear that leads onto the small private garden area that has a table and four chairs. Parking is across the street on a quiet cul-de-sac.

We arrived early afternoon after a 250 mile journey through heavy traffic and persistent rain, just as the sun came out. After letting ourselves in and unloading the car we decided to walk into Lyme. Warning: although our host Sandra T had stated in an email that it is a comfortable 10min stroll to the beach and sea front, Google Maps says it is a mile's walk and although it is all downhill I doubt anyone strolls at six miles per hour! We spent a very pleasant afternoon in Lyme and walked back.

That evening we shared a bottle of wine in the back garden as the warm sun went down, so we didn't notice anything amiss until the early hours of the morning. Other reviews have mentioned the comfortable bed. It is a small double, being 4 feet wide instead of the standard 4 feet six inches. It creaks, and the mattress does not dampen any movement so that when one of us turned over the movement transmitted through the mattress and shook the other person. Once awake, we found it impossible to get to sleep again. It is surprising how annoying the loud ticking of the clock and the warbling of the fridge can be when you are short of sleep. As it was August, it became light about 5:30 and the thin curtains did little to keep the light out.

In the bathroom when stood in front of the washbasin, all I could see of my face in the small mirror was the tip of my chin. I am 5 feet 9 inches tall. When stood in the bath to use the shower, the shower head was just below shoulder level. The shower pressure and temperature were good until my partner turned on a tap in the kitchen and I had to jump backwards to avoid being scalded.

There is WiFi provided but the signal is very weak. We found a WiFi booster that was switched off when we arrived, and when switched on it made no difference other than a couple of LEDs flashed on and off. We left it an hour to see if it would eventually boost the WiFi, but it didn't.

The following night we went to bed sober which was a mistake. After a while, my partner left the bed and tried sleeping on the chair at first, and then curled up on the two-seater settee. In the morning, although we had stayed for only two nights instead of the four that we had paid for, we left.

Date of stay: August 2017
Your age range 50-64
Would you recommend this hotel to a friend?   No.
Was this review helpful? Yes
This review is the subjective opinion of a TripAdvisor member and not of TripAdvisor LLC
Thank you for your review. I wanted to point out the bed is pine slatted with a year old Slumberland mattress. Most quests sleep very well due to the sea air.
We have quests that have come back year after year, because they love the accommodation, your comments are new to us. The curtains are new quality lined curtains from Next. We were at home when you stayed and thought you were still there, I wish you had spoken to us, as we try to do our best to Please our guests .However we can't remide poor sleeping patterns.
This response is the subjective opinion of the management representative and not of TripAdvisor LLC
Problem with this review? Thank you. We appreciate your input.

Can't praise this accommodation enough along with excellent hosts. Private, comfortable, clean and very homely. There was even a private garden area. A lovely kind jug of milk and t bags for a hot drink after a long drive, perfect. I am amazed that you can find such lovely accommodation and people at the most reasonable price you can imagine. Thanks again for a lovely break. Xx

Date of stay: August 2017
Was this review helpful? Yes
This review is the subjective opinion of a TripAdvisor member and not of TripAdvisor LLC
Thank you for your kind comments, we try hard to keep our standards high. You are very welcome to come again and thank you for leaving everything so tidy
Sandra
This response is the subjective opinion of the management representative and not of TripAdvisor LLC
Problem with this review? Thank you. We appreciate your input.

The Annexe was very well equipped and comfortable. It's in a quiet location within walking distance of the town and suited our needs perfectly. We found the price reasonable and hope to return for a long weekend in the autumn.

Date of stay: April 2017
Would you recommend this hotel to a friend?   Yes.
Was this review helpful? Yes
This review is the subjective opinion of a TripAdvisor member and not of TripAdvisor LLC
Michael, thank you for your review,we do ur best to keep the Annexe up to tourist board standard.
You both are welcome to stay again, we have some guests returning Year after year
Many thanks
Sandra
This response is the subjective opinion of the management representative and not of TripAdvisor LLC
Problem with this review? Thank you. We appreciate your input.

We found this place great value for money with regard to other places in the town. Very clean and lovely property. It was our second visit to "The Annexe" and it's even been upgraded since our last stay which was also great!

We met the owner again and was surprised that she remembered who we were and welcomed us in for a fantastic stay.

The weather was also great and we could enjoy the town for the week we were there.

Would definitely recommend and we will always stay here when we return.

Date of stay: March 2017
Was this review helpful? Yes
This review is the subjective opinion of a TripAdvisor member and not of TripAdvisor LLC
Thank you for your kind remarks. Also thanks for leaving everything clean and tidy.
You are welcome to stay again
Kind regards
Sandra
This response is the subjective opinion of the management representative and not of TripAdvisor LLC
Problem with this review? Thank you. We appreciate your input.

1 review
“Everything you need for a relaxed perfect break.”
Reviewed 2 February 2017 for a stay in January 2017

Lovely, very well equipped apartment and very comfortable. Sandra and Roger were lovely host making the warmest of welcomes. Myself and partner will return again as it was such a beautiful perfect quick break.

Date of stay: January 2017
Your age range 18-24
Would you recommend this hotel to a friend?   Yes.
Was this review helpful? Yes
This review is the subjective opinion of a TripAdvisor member and not of TripAdvisor LLC
Thank you for your comments, we are glad you enjoyed the apartment, and you are both welcome to stay again
This response is the subjective opinion of the management representative and not of TripAdvisor LLC
Problem with this review? Thank you. We appreciate your input.

The electric metre was Exspensive to run we had to put £6in for a two day stay,i never ever had to pay for electric anywhere ive stayed.there was a lot of clutter ever where,old tomato sauce on the side and old tea bags,the bath cost £1 to heat up but it was a tiny bit of water.everything was run by electric,not good.
when we ran the bath the bathroom looked like a sauna,water running down the walls,and that was with the window open.the room had two electric heaters in it but one only worked at once cos of the thermostat cut the other one out! .bed not good neither,very small double.the building was clean thou.

Date of stay: November 2016
Travelling group: Spouse/Partner
Would you recommend this hotel to a friend?   No.
Was this review helpful? Yes
This review is the subjective opinion of a TripAdvisor member and not of TripAdvisor LLC
I can not believe how vindictive some people can be over putting £6 in the meter that is already subsidised by the owners. Your wife had already written the previous review for the same weekend.
The radiator you had set at 26degrees, no wonder the thermostat cut in. Also when a bath is run, ourselves always open the window to let the steam out and prevent condensation building up. I know full well that the bathroom window was not opened an inch and to make it worse the blind was also pulled down.
We try our best to think of everything, but "there is nowt queerest than folk"
This response is the subjective opinion of the management representative and not of TripAdvisor LLC
Problem with this review? Thank you. We appreciate your input.
Previous Next
1 2 3 4 5 6 7
Updating list...
Still can't find what you're looking for?

Looking for a place to stay in Lyme Regis?
View all 41 holiday rentals