In need of updating - Review of Maritime Park & Spa Resort

Orbitz.com
eDreams
Expedia.comUS$26
View all 14 deals
Prices are provided by our partners, and reflect nightly room rates, including all taxes and fees known to our partners. Please see our partners for more details.
Payments made by partners impact the order of prices displayed. Room types may vary.
CariocaBrazil
Sao Paulo, SP
179172

In need of updating

The hotel has a huge green area around it. It is a relaxing place on the outside. However, the inside, I mean the rooms, need urgent updating. Stayed in two different rooms. The first one looked older, with carpet on the floor, stained mirrors on the bathroom, though spacious. The second one had laminated wooden floor, what made it look far newer and more pleasant. I understand that big properties like this one take a lot of effort to maintain. In fact, some renovation was being made in one of the buildings. But others need painting on the outside. The swimming pool is great and the spa looks wonderful, though I hadn´t tried it. The garden is lovely and can be explored by bikes. Near the river we could see some monkeys and we loved walking across the pond. The food was ok and so was breakfast. They do have a shuttle to Ao Nang Beach, what is very helpful. The hotel has a lot of potential but needs updating. Internet is free at the lobby, but we managed to use in the restaurant as well while dining.More

Show less
See all 289 reviews
Payments made by partners impact the order of prices displayed. Room types may vary.
Nearby Hotels 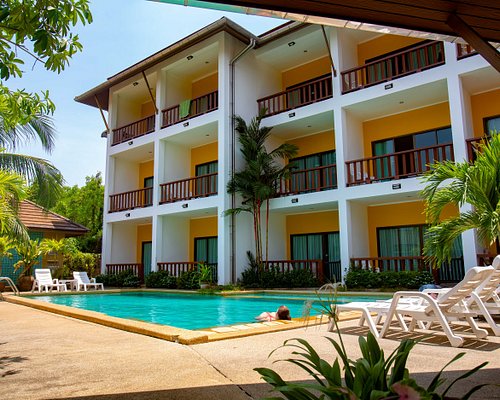 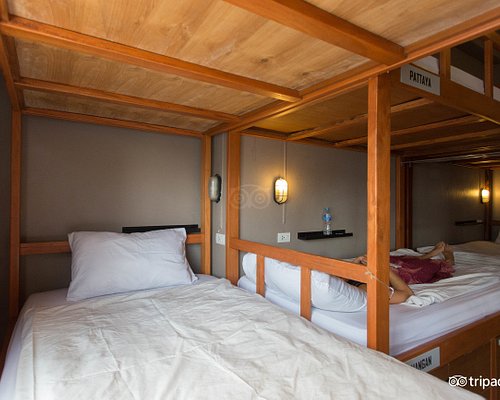 Hotels.com
View deal
Expedia.com
US$16
Agoda.com
US$14
Priceline
View all 11 deals from US$14
1,017 reviews
1.3 miles from Maritime Park & Spa Resort
We compared the lowest prices from 11 websites

We stayed at the Maritime for 2 nights at the end of a 2 week holiday and we can see where some other reviewers are coming from with their criticisms, but we had a nice time here.

Staff: helpful, sometimes couldn't understand English that well but would always ask someone else to help answer our questions

Location: a bit far from town to walk, but there was a free shuttle to/from Krabi Town and Ao Nang 3 times a day, and 150 baht taxi (between 2) to town at night which was fine.

Facilities: pool was awesome, had a spa and gym, would have loved if the swim-up bar was still running, restaurant was nice, of course though a bit more expensive than restaurants in town, the grounds and the lake were nice to wander around. Buffet breakfast was nice.

Overall: nice relaxing place where you aren't cut off from the world if you know where to go, with a few minor updates could be fantastic.

This review is the subjective opinion of a Tripadvisor member and not of TripAdvisor LLC.
GumdropGirl
Los Angeles, California
6563
Reviewed 22 March 2012
I really wanted to like this place, I see its potential.

I get the distinct feeling that this place doesn't get a lot of business.

I arrived with my family for the annual Thai Physicians Association of America (TPAA) convention. Apparently, this resort was chosen because it was the only property in town that could accomodate such a large meeting.

The staff are very helpful and friendly. We were led to our rooms in tower 5, furthest away from the lobby. We had a very spacious room with a lovely view of a large rock (the sea was on the other side of the rock -- I am not being facetious, the rock was beautiful). The mattress was old and flattened, like a dormitory spring mattress. The bathroom was dark and humid, with visible mildew stains of the grout. The bathroom itself was "clean," but not bleached to remove mold. The overhead light was a small, circular fluorescent tube, but it was terribly dim. The sinks and vanities were outside the bathroom, and they were shiny and new. A kitschy, plastic beaded curtain separated the bath and dressing area from the rest of the room. The television was a flat-screen CRT with local channels. Our room had a special bonus: an angry hornet flying around the room. We used rolled up newspapers to chase it out the balcony.

After settling in, I put on my swimsuit and went downstairs to the pool. The pool is huge, but nobody was it in. Maybe three people total at 3:00pm. Convention-goers made about 90% of resort attendance, with a scarcity of other travelers.

I took a shower. The bathroom has a bathtub and a separate shower stall. The shower was weak. Hardly any water pressure. Made it really, really difficult to wash my hair. And while the bathtub has a hand-held shower head, there is no curtain around it, so I made a terrible mess of the bathroom trying to get that to work. On the bright side, there is a retractable clothes line over the tub, so you can hang your soggy swimwear.

I went to bed early and had a restful sleep. The place is quiet. Probably because it was deserted.

The next morning, I took advantage of their single best amenity: the tour concierge. God help them if they didn't have a great tour desk; this resort is so far out of the way of *everything* that you would otherwise be trapped on its premises. The resort's tour concierge has a daily schedule of tour pick-ups for various popular destinations. I chose the Phi-Phi Island Tour, which departs the resort at 8:15am and returns around 6:00pm. I will review the tour company separately. Stay tuned.

If I must laud the resort on its own virtue, I must say this: the food is great. That is, the food is great if you like local Southern Thai cuisine. If you are reasonably adventurous and want to eat the local fare, this resort is great. But if you must eat sandwiches, burgers or American fare, you are out of luck. The convention's dinner service was a buffet of multiple stations: the seafood grill, the hot entree line, the salads, the stir-fry bar and the desserts. The breakfast was international - cereals, pastries, omelet station, breakfast meats, rice porridge and fresh local fruit. And lunch was a quick-serve cafeteria line of local delights like khao yum (rice salad), khao mok (curried rice) and chicken, or street-style noodles. The only thing I didn't like was being charged 300 baht for an iced coffee.

Still, the place leaves much to be desired. Yes, they have free wi-fi in the lobby. However, the signal is weak, so there was a clowder of us huddled in a corner with our phones and iPads desperately trying to get on the network. The resort is in DIRE need of renovations. They make absolutely no effort to conceal dilapidated old storage sheds and employees' dormitories. From the upper floors, you can have a clear view of the waste-water treatment modules, bubbling up and seething with grey water. The pool has a waterfall feature that is not running, and you can see the mildewing on the cabanas. A simple bleaching and paint job would do wonders. But without it, the whole place looks old and sad. I saw so much potential for this resort, and I think that's what kept me from hating my stay. They need to remodel, or they just won't survive.

This review is the subjective opinion of a Tripadvisor member and not of TripAdvisor LLC.
chistosa
Trondheim, Norway
43
Reviewed 25 February 2012
Bad choice!

If we didn't arrive so late, we would have just got in a cab and drove somewhere else - anywhere else.

1.Did not find booking at arrival (but we only booked 6 hours in advance) 2. Got "upgraded" to a better room, but had 2 single beds - our booking was double. 3. Service was not really anything to brag about... Staff seemed bothered by questions. 4. Room smelled like mould, and from the look of it you weren't surprised. Also stained bedding... 5. Our booking said "minibar", there was only 2 bottles of water in the fridge. 6. Went to eat in the restaurant (no where else to go, I'm afraid) - ants all over our table! 7. Poor breakfast.

Couldn't be happier to leave the following morning. If only the service was good, I'd rate it higher.. but when even that fell apart, I had no choice...

Room tip: Not sure if any rooms are good here...
Ask chistosa about Maritime Park & Spa Resort
3  Thank chistosa

This review is the subjective opinion of a Tripadvisor member and not of TripAdvisor LLC.
hotbutteredfungus
n/a
259
Reviewed 8 February 2012
Nice hotel, bad location

Not very luxurious, but clean, spacy and peaceful room with beautiful forest and hills view. Big pool and good breakfast but the hotel really is far from everything.

This review is the subjective opinion of a Tripadvisor member and not of TripAdvisor LLC.
Yana L
Almaty
22
Reviewed 28 January 2012
Awful

DIRTY, old, STINKY, far from civilization. Regretted choosing it!!! Don't recommend to anyone!

This review is the subjective opinion of a Tripadvisor member and not of TripAdvisor LLC.
View more reviews
PreviousNext
1…181920…