eDreams
Booking.comUS$356
Priceline
View all 17 deals
Prices are provided by our partners, and reflect nightly room rates, including all taxes and fees known to our partners. Please see our partners for more details.
Payments made by partners impact the order of prices displayed. Room types may vary.
GerbilQueen
Hertford, United Kingdom
639267

We thought we'd be lucky to get a table, but we managed one on the terrace and enjoyed the spectacular views both over the lake and up the waterfall. The service was a little slow, but they were incredibly busy and the food was excellent. We had a quick peek in the entrance hall and would have liked to have stayed here as it was such a special place.
Next time we will.

See all 917 reviews
Payments made by partners impact the order of prices displayed. Room types may vary.
Nearby Hotels 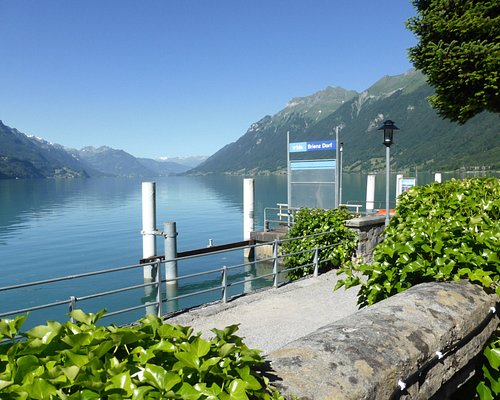 Priceline
View deal
eDreams
Booking.com
US$154
FindHotel
US$154
View all 7 deals from US$154
134 reviews
1.3 miles from Grandhotel Giessbach
We compared the lowest prices from 7 websites

Breakfast included
Hotel Weisses Kreuz
US$115
Tripadvisor
View deal
Priceline
eDreams
Booking.com
US$115
View all 7 deals from US$115
56 reviews
1.5 miles from Grandhotel Giessbach
We compared the lowest prices from 7 websites 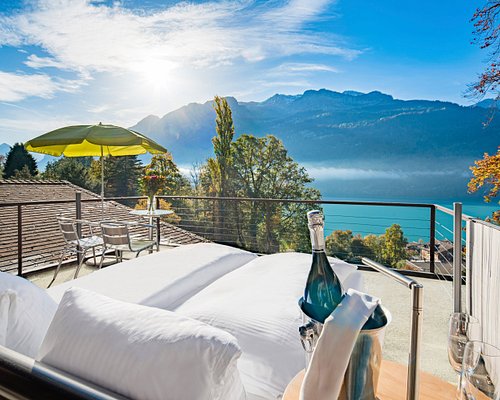 We (my brother, 2 friends of me and I) would like to drink a coffee und eat a cookie on the terrace of the hotel.
First of all we would like to ask a water for our 2 dogs, but than the waitress pointed to an almost empty bowl under another table, and said, there is some. There was about 1 cm water in the bowl, and that was anyway the rest from earlier. We said it her, and then she brought some fresh water to the dogs, but not with pleasure.
She handled the dogs as some "disturbing things", although the made nothing, they were in silent and calm.

The waitress was for the entire time arrogant and up-stage, and unfortunately spoke not at all good german.
For example when she brought out the drinks she could not all of them bring, because she had not enough big plate. It would be of course no problem. My brother then would like to ask, if his order was right, because he said just "Latte", and not "Latte Macchiato". So he just would like to be sure, that the right drink will come in the next round.
But the waitress didn't really understand the question, and she started to preaching very arrogant, and showing her plat to the face of my brother, that she didn't have more space on the plate, thats why she didn't bring it yet. We told, that is not a problem at all, we would like just to know, if the order was clear, or not.

Not just the service was bad, but all of the latte macchiatos were total cold, and the half of them was foam, furthermore the cakes had also a very bad quality.

The restaurant would be basically "fancy" according that belongs to a 5-star hotel, and accordign to the preises, but unfortunately also the service and also the products were bad.

So this visiting unfortunately ruined the end of our daytrip.

This review is the subjective opinion of a Tripadvisor member and not of TripAdvisor LLC.
alalkovitch
Waterford, Ireland
95
Reviewed 20 June 2019 via mobile
A little piece of heaven

I have looked at The Grand Hotel, Giessbach with wonder on many occasions as I travelled upon Lake Brienz, snuggled amongst the trees high above the water, with the magnificent waterfall thundering down the hillside above. I had promised myself that on the next trip to Switzerland I’d go there to visit but never seemed to get the time, well today I decided the time had come and we should dine there for my wife’s birthday and after starting the day up the Schilterhorn for breakfast one would imagine it hard to top it with a more spectacular venue for dinner but we did.
The Grand Hotel is one of those places that everybody should visit at least once in their lifetime. Whether it is only to walk in the beautiful woods or garden, wonder at the majestic power of the waterfall or stare into the beauty that surrounds this little gem on all sides over Lake Brienz, it has to be experienced. Our dinner in “Les Cascades” restaurant was just beautiful, the restaurant sits at the base of the falls and our table was centre window facing the water cascading down through the trees. The starter of vegetable soup with mushroom topping was superb, the main course of Oberland beef for two was incredible, cooked medium and to perfection, sliced and served at the table, a mouth watering Bernaise sauce to accompany and desert of Rhubarb and sour cream mousse literally just topped off this superb dining experience.
Service was superb, the hotel manager Mark visited us during the meal to check our needs were being met and made our visit very personal and appreciated...
I cannot speak highly enough about this beautiful hotel and if our visit was anything to go by I could recommend this experience to anybody visiting this area, it could be as it was with us, the highlight of our holiday from Ireland. I cannot wait to come back and stay here next time, the thought of waking up in this little bit of heaven would just be incredible to experience...

This review is the subjective opinion of a Tripadvisor member and not of TripAdvisor LLC.
ccal3pacific
Dallas, Texas
14664
Reviewed 19 June 2019
One of a kind hotel

Such a magical place and experience - I now recommend this hotel to all my friends when assisting them with Switzerland travel plans. Similar to another reviewer, we initially wanted to explore this property due to the Band of Brothers connection, however once we set foot on property it became so much more than a filming location. It is truly like stepping back in time with traditional decor and remote feel. Arrival by boat/funicular is easy and because the funicular was extremely empty, the funicular operator gave us a brief history of the funicular and property itself. Our first visit here was September 2018 and loved it so much, we returned in May of 2019 with four friends to share the experience with them

This review is the subjective opinion of a Tripadvisor member and not of TripAdvisor LLC.
Wonderweggers
Rumisberg, Switzerland
2783
Reviewed 12 June 2019
Truly Magical!

A stay at the Grandhotel Giessbach is like stepping back in time to a lovely lakeside movie that you never want to end. The setting is breathtaking and the service is impeccable, but also warm and welcoming.
Back story, and a true story: A friend and I were hiking along Lake Brienz in Fall 2018 and -- hot, a little dusty and thirsty -- literally stumbled upon this lakeside beauty. The staff welcomed us despite our shorts, hiking boots and ball caps. We had a beer on their fabulous patio and inquired at the desk about taking a hotel shuttle back to the train. They graciously assisted us and even boxed up the lunch we ordered so we wouldn't miss the shuttle. We vowed to return for an overnight stay, and this May, we made it happen!
Our stay could not have been more perfect, and the staff could not have been more kind or gracious. Two of our party of three took a day tour and arrived back late. I was traveling with my dog, and Renáta, the bartender, was so phenomenal. In addition to serving me a wonderful and delicious dinner on the hotel patio (and water for my dog) she then made sure to take a dinner order for my two friends so they wouldn't miss dinner with their late arrival. She and the kitchen staff truly went above and beyond. This hotel is lovely and the setting is amazing, but it's the staff who make it a truly special, memorable and perfect experience. I can't wait to return!

This review is the subjective opinion of a Tripadvisor member and not of TripAdvisor LLC.
SlainteClontarf
Altenbeken, Germany
4829
Reviewed 31 May 2019 via mobile
Great Hotel

We stayed for a tranquil week in this beautiful hotel set in the alps. We left so relaxed and thoroughly enjoyed our stay. Stunning views, lovely walks a beautiful lake, what more could you wish for. The food was great, the staff very helpful. We even brought our two Yorkshire terriers with us, which was no problem for the hotel either.

We will definitely return