“we love this villa”
TWtjXzU3X2w0ag==
other travellers have booked this property 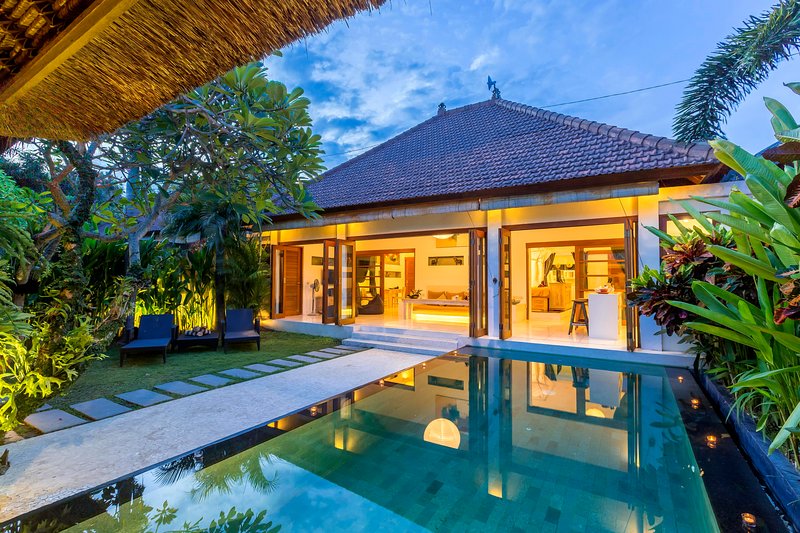 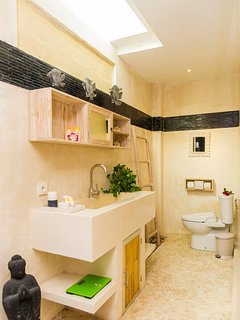 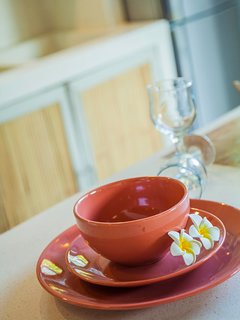 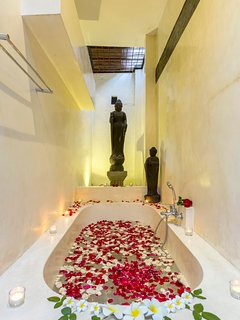 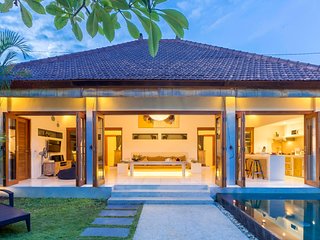 Very good - based on 21 reviews
Write a Review

This was our second stay at this lovely villa. It is so clean and tidy, cleaned everyday and every time we ask for assistance it happens immediately and with a smile. I love that it is located off the main roads and this also means it is incredibly quiet and serene. We love everything about this villa, the pool is one of the largest in a villa this size and is wonderful, the beds are so comfortable. The first time we stayed it was just my husband and I and we loved the peace and quiet and also the very close proximity to the heart of seminyak and the amazing restaurants you find there. This stay there were two couples and the villa suited us perfectly. There is plenty of space for us all to relax and chill out in our own way and not disturb each other. I appreciate how much is offered to assist with the mosquitos - all part of the supplies in the villa but we were thrilled that we did not have a mosquito problem at all this stay. We appreciate all the welcome treats and supplies, you could turn up here with nothing but the clothes you were wearing! We will definitely be staying here again. We thank Marco and his whole team for all their help and assistance and we truly appreciated the offer of the transfer to the airport at the end of our stay. We can't wait to come back. I highly highly recommend this villa.

Date of stay: January 2016
Liked best: location and facilities
Liked least: nothing
Travelling group: Spouse/Partner
Would you recommend this hotel to a friend?   Yes.
Recommended for:
Was this review helpful? Yes
This review is the subjective opinion of a TripAdvisor member and not of TripAdvisor LLC
Problem with this review? Thank you. We appreciate your input.

Date of stay: February 2015
Was this review helpful? Yes
This review is the subjective opinion of a TripAdvisor member and not of TripAdvisor LLC
Problem with this review? Thank you. We appreciate your input.

We found another listing on tripadvisor for the same villa with a comment from another traveller who had the same issue, she was wise enough to leave and go somewhere else after 1 day. i only saw this when we came home, I wish I had seen it before - I don't think i would have booked it. I am expecting a response to this, to say the hosts offered an alternative, for us to leave and mosquito repelling equipment. All this is true, but it doesn't change the fact the problem was dealt with or our experience.

We booked 9 nights end of September - early October. This holiday was a first family vacation with our 3 month old baby. We wanted privacy, own pool, option to cook for ourselves, be close enough to the restaurants and beach. Marco, the driver and staff are very lovely and did everything they could to ensure we had pleasant stay.

Villa Gaya 1, has a problem with Mosquitos. In the course of our stay there we saw off an excess of 500 minimum and that is no exaggeration. We are not inexperienced travellers, and are exposed to mosquitoes on a daily basis. In our early 40's, we live in China, have backpacked around most of the world over the past 20 years, slept in beach huts, jungle huts through to 5-star accommodations. Contrary to our host's suggestion that perhaps we'd only stayed in hotels before, which we felt to be a highly patronising justification in his mind to pass off the excessive number of mosquitos in this villa. The best thing to do in this situation would of been to show some empathy rather than passive aggressive suggestions - we felt quite irritated after this.

We were offered to leave and move somewhere else - with a baby in tow, it was defeating the object of a nice relaxing holiday and we didn't have the energy to look for something else. In hindsight, I wish this is what we had done. The host also offered for us to see the villa next door, but as this was where he was staying the suggestion put us off. He asked the cleaning staff to come everyday at 4 and light repellent smokers outside. This didn't work either.

At night we ended up hiding in the air conditioned bedroom, with the mosquito net down around the bed rather than actually relaxing in the mosquito infested living space. Some nights were better than others. One night was so bad, even the cleaner the next day was shocked at the number of little dead mosquito bodies that littered the floor of the villa. By the way, we couldn't sweep them up ourselves as the floor sweeper was locked away and only the cleaners had access. It was pretty gross having to walk around on a dirty floor till they arrived.

The Villa itself is ok, it is a little worn particularly the kitchen/bathrooms. There is a big build up of limescale, dust and dirt in the bathroom. Our towels were only changed once. Bedding not at all, but that was because we asked the cleaners not to go in our bedroom. After the first day, they went in and after they left 4 mosquitos managed to get inside the mosquito netted bed. We were being really strict about this space, as it was the only place we could protect the baby, so every day this after we asked them to leave the bedroom for cleaning.

The cleaners & driver were nice, Marco makes you feel as though he is being helpful. They'd been flexible accommodating for the baby and payment.

The villa itself is quite a walk to the restaurants and an even further walk to the beach and beach clubs. It's a quiet area, with lots of villas.There is a school close by and can get very noisy a few times a day.

I can't really say i was overly impressed. I felt like we put up with this villa, whereas we should of just taken the opportunity to go when it was offered.

Date of stay: October 2014
Travelling group: Young Children
Would you recommend this hotel to a friend?   No.
Was this review helpful? Yes
This review is the subjective opinion of a TripAdvisor member and not of TripAdvisor LLC
We thank you for your lengthy feedback. Yes, we do have some mosquitos at the villas on occasions and we always do what we can when guests request assistance. For that reason, when you asked for help, we provided you with mosquito coils, mosquito spray, electric mosquito dispensers, mosquito lotion, a baby’s bassinet with mosquito netting and already in the bedrooms, we provide bed mosquito nets. As nothing we offered, seemed to be adequate, we even offered a full refund, but this offer was not taken up. We note that you are seasoned travelers but somehow you found your stay with us to be frustrating, mainly due to the mosquitos. Other guests have understood that mosquitos are part of the deal when living in a tropical climate and in an outdoor villa. The towels were cleaned once only because as you said, you were “strict” and the staff were refused entry to the bedrooms. We appreciate your comments and we do our best to keep all guests happy during their stay.
This response is the subjective opinion of the management representative and not of TripAdvisor LLC
Problem with this review? Thank you. We appreciate your input.

Paris, France
Reviewed 23 August 2014 for a stay in August 2014
Date of stay: August 2014
Liked best: The staff availability, and the fact that Marco sent a driver to pick us up at the airport
Travelling group: Spouse/Partner
Your age range 25-34
Would you recommend this hotel to a friend?   Yes.
Recommended for:
Was this review helpful? Yes
This review is the subjective opinion of an individual traveller and not of TripAdvisor LLC nor of its partners.
Problem with this review? Thank you. We appreciate your input.

Reviewed 28 June 2014 for a stay in June 2014
Date of stay: June 2014
Travelling group: Friends
Would you recommend this hotel to a friend?   Yes.
Recommended for:
Was this review helpful? Yes
This review is the subjective opinion of an individual traveller and not of TripAdvisor LLC nor of its partners.
Problem with this review? Thank you. We appreciate your input.

Karratha, Australia
Reviewed 27 May 2014 for a stay in May 2014
Date of stay: May 2014
Liked best: great setup with amenities supplied
Liked least: lounge and kitchen not air conditioned
Travelling group: Spouse/Partner
Would you recommend this hotel to a friend?   Yes.
Recommended for:
Was this review helpful? Yes
This review is the subjective opinion of an individual traveller and not of TripAdvisor LLC nor of its partners.
Problem with this review? Thank you. We appreciate your input.

Australia
Reviewed 14 November 2013 for a stay in September 2013
Date of stay: September 2013
Would I recommend this holiday rental to my best friend?
Recommended for:
Was this review helpful? Yes
This review is the subjective opinion of an individual traveller and not of TripAdvisor LLC nor of its partners.
Problem with this review? Thank you. We appreciate your input.
Previous Next
1 2 3 4
Updating list...
Do you own a holiday rental? List it here.

Looking for a place to stay in Seminyak?
View all 1,698 holiday rentals