“Overall Nice”
VUpXXzlfdWJR
other travellers have booked this property 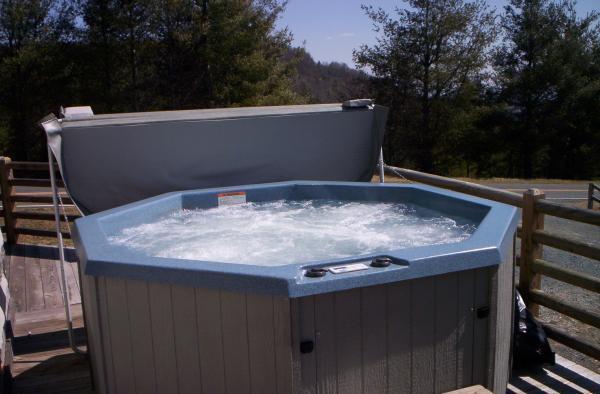 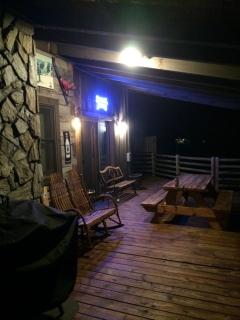 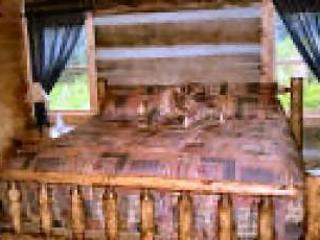 Let me start by saying this cabin can easily sleep 6 comfortably but it was only my boyfriend and I who stayed. There are a few things I would have changed about the cabin all minor details but overall this was a great trip for us. First, the cabin is right off a road with a neighbor and another cabin right at the base of the hill. Not as secluded as we had hoped for, even though no one was staying in the cabin at the base of the hill while we were there. If you are planning on going with 6 adults you should know there is no bathroom located without going through a bedroom. It is kind of a design flaw and whomever is sleeping down stairs its a little odd. The closet opens up to the underside of the house and there is a panel in the wall that also just opens up to the underside of the house. So it is cold and very drafty down there plus no access to a bathroom. The staff who manages this cabin is super friendly and very helpful but I am not sure the cabin is fully cleaned correctly prior to each persons arrival. The floors are filthy. Not swept or mopped. And even though the cabin itself is well maintained there is a desperate need for updated linens. Make sure you bring your own pillows and maybe even a blanket. There are not enough towels to shower and use for the hot tub unless you plan to do laundry. The views are great, the hot tub was nice and it is within an hour from Beech Mountain and only 20 mins from downtown Boone. It is about 5 mins from an entrance to the Blue Ridge Parkway also. Another small detail that distracts from the overall enjoyment of the cabin is all the posted, taped, notes all over the house. Maybe make a binder with everything that could ever need to be known and take down all those notes and place the binder on the coffee table. Like I said just minor detail things we would have changed. First on the list would be the bedding. I would certainly recommend this cabin to anyone looking to get away and enjoy the Boone, Blowing rock area.

Date of stay: February 2016
Liked best: How close it was to nearby cities
Liked least: Bedding
Travelling group: Spouse/Partner
Would you recommend this hotel to a friend?   Yes.
Recommended for:
Was this review helpful? Yes
This review is the subjective opinion of a TripAdvisor member and not of TripAdvisor LLC
Problem with this review? Thank you. We appreciate your input.

Dallas, North Carolina
Reviewed 2 June 2014 for a stay in May 2014
2
people found this review helpful
Date of stay: May 2014
Liked best: Comfy bed, beautiful view, hot tub, EVERYTHING!
Travelling group: Young Children
Your age range 25-34
Would you recommend this hotel to a friend?   Yes.
Recommended for:
Was this review helpful? Yes
This review is the subjective opinion of an individual traveller and not of TripAdvisor LLC nor of its partners.
Problem with this review? Thank you. We appreciate your input.

On the positive side, the view was nice and the cabin itself was in good shape.
Still, it was the least favorite cabin we have ever stayed at. We stayed three nights at the end of April 2013. The worst thing was the constant cycling of the hot tub. It kicked on and off 20-30 times a minute, never staying off over a couple of seconds. This made it hard to sleep for the first two nights. Finally we moved to the other bedroom and it was quieter since we were farther away. My wife didn't want to sleep in that room at first because they had sheets on the bed that didn't fit it. But sleeping was more important than having sheets that pulled off the mattress.
We called Witt's End when we first got there because they had left trash sitting on the front porch in a bag. This was a big deal because we had to sign an agreement that we would take our trash to the dumpster or pay a $50 fine. I've never had to do that before, but they warned us, so I can't complain too much about that. When I called about the trash being left, I mentioned the hot tub cycling. The property manager made a comment about me not knowing how hot tubs sound in the spring in the mountains. I have rented cabins with hot tubs in Gatlinburg and in Tellico Plains in the spring and I am aware how they are supposed to work when they are not malfunctioning. When someone came on the next day to get the trash, I had her come listen to the tub and she said it didn't sound right, and said they'd have to get someone to look at it. A lot of good that did us. I also told her that two of the three dvd's were out. She told me the owner would not be back until a few weeks. Wow, that's service. We watched movies in a bedroom instead of the living room. There was no working remote in that room.
Other than it not being maintained, it was a decent cabin. My wife said it needed a woman's touch as it didn't have much decoration and was very plain. Ok for a rustic cabin, but much less decoration than we have seen in our other cabin rentals.
One other word of caution - To top off the irony of having the trash on the doorstep when we had to sign papers that we would remove our own trash, we had asked about where to put the trash when we signed this paperwork since we were travelling on a bike. Witt's End told me I would have to take it to the facility at the end of the road which is about a mile. Not great, but the knowing is the important part, right? Well what they didn't tell me was that the facility was closed on Wednesdays which is when we checked out. Fortunately we saw the sign that it was closed Wednesdays so we took all the trash Tuesday afternoon. We had a little trash left for Wednesday morning, but our option of driving 10 miles the wrong way back into Boone to take it to the rental office seemed like a bad idea. So my wife held the trash for 14 miles up the Blue Ridge Parkway until we got to an overlook with a receptacle.
Thanks, Witt's End. I think I reached mine.

Date of stay: April 2013
Liked best: View from the deck
Liked least: Hot tub noise / Trash problems
Travelling group: Spouse/Partner
Would you recommend this hotel to a friend?   No.
Was this review helpful? Yes
This review is the subjective opinion of a TripAdvisor member and not of TripAdvisor LLC
Guest did report trash being left on the front porch. Based on his report, we expected to find several 13 gallon bags of trash when we went to pick it up the next day. We found 1 gray Walmart/grocery bag of trash. Our sincere apologies for the oversight. We also offer trash pickup ( in our policies) for a very reasonable rate for guests on motorcycles or for those who prefer that service. This guest chose not to utilize that option.
To correct the 'sheet problem" would have only taken a phone call to our office and supplemental linens would have been delivered and put on the bed.
The hot tub did seem to be cycling a lot and getting a tech over to check it out on short notice can be difficult here. Lots of hot tubs up here, not enough service technicians.
Wits End Management
This response is the subjective opinion of the management representative and not of TripAdvisor LLC
Problem with this review? Thank you. We appreciate your input.

Lillington NC
Reviewed 17 July 2012 for a stay in June 2012
Date of stay: June 2012
Would I recommend this holiday rental to my best friend?
Recommended for:
Was this review helpful? Yes
This review is the subjective opinion of an individual traveller and not of TripAdvisor LLC nor of its partners.
Problem with this review? Thank you. We appreciate your input.

NC
Reviewed 12 June 2012 for a stay in June 2012
Date of stay: June 2012
Would I recommend this holiday rental to my best friend?
Recommended for:
Was this review helpful? Yes
This review is the subjective opinion of an individual traveller and not of TripAdvisor LLC nor of its partners.
Problem with this review? Thank you. We appreciate your input.

1 helpful vote
“Excellent & well-run; clean and well-equipped. Recommend to anyone.”
Reviewed 3 May 2012 for a stay in May 2012
1
person found this review helpful

This was our first time staying in Boone, and we were not disappointed. This was a beautiful cabin, very homey, clean and well-equipped. It has 2 jacuzzis in each bath, a well-stocked kitchen, a hot tub on the deck with breathtaking views of the Blue Ridge Mtns. The staff were friendly and excellent and very responsive; we were surprised to receive a complimentary bottle of wine! Couldn't have been better. I would definitely recommend this company to anyone, and plan to return next year. Great for families, too!

Date of stay: May 2012
Liked best: friendly staff, great amenities, very pretty cabin & good bathrooms!
Liked least: no complaints
Travelling group: With Friends
Would you recommend this hotel to a friend?   Yes.
Recommended for:
Was this review helpful? Yes
This review is the subjective opinion of a TripAdvisor member and not of TripAdvisor LLC
Problem with this review? Thank you. We appreciate your input.

Sanford
Reviewed 19 February 2012 for a stay in December 2011
1
person found this review helpful
Date of stay: December 2011
Would I recommend this holiday rental to my best friend?
Recommended for:
Was this review helpful? Yes
This review is the subjective opinion of an individual traveller and not of TripAdvisor LLC nor of its partners.
Problem with this review? Thank you. We appreciate your input.
Previous Next
1 2
Updating list...
Still can't find what you're looking for?

Looking for a place to stay in Boone?
View all 279 holiday rentals