Great location for Chelmsford , staff are really perfect and worth considering this hotel - Review of Best Western Atlantic Hotel

Traveluro
StayForLong
Expedia.com
View all 15 deals
Payments made by partners impact the order of prices displayed. Room types may vary.
Prices are provided by our partners, and reflect nightly room rates, including all taxes and fees known to our partners. Please see our partners for more details.
JOHNROBERTS57
Kendal, United Kingdom
173110

Great location for Chelmsford , staff are really perfect and worth considering this hotel

The rooms are clean and perfect for a city break. Beds are massive I could not even hear my wife snore as she was that far away. Staff super and breakfast whether continental or full English really well presented . Place hard to fault except bar could open a tad earlier than 5 pm especially at weekends.

Room tip: All rooms quiet we were in 233 and would stay in this one again.
See all 556 reviews
Payments made by partners impact the order of prices displayed. Room types may vary.
Nearby Hotels 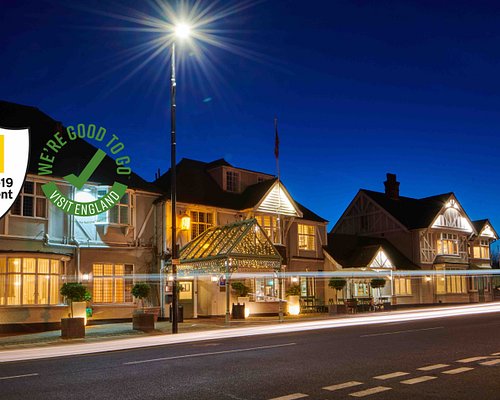 Sponsored
The County Hotel
US$139 Expedia.com
View deal
Hotels.com
FindHotel
US$66
Orbitz.com
View all 13 deals from US$66
32 reviews
0.4 miles from Best Western Atlantic Hotel
We compared the lowest prices from 13 websites

Travelodge
View deal
Priceline
US$63
Agoda.com
US$52
Destinia.com
US$63
View all 13 deals from US$52
132 reviews
0.9 miles from Best Western Atlantic Hotel
We compared the lowest prices from 13 websites
Top Rated
Pontlands Park
US$141

Expedia.com
View deal
Pay up to 12X
Tripadvisor
US$138
Travelocity
Priceline
US$150
View all 14 deals from US$138
772 reviews
2.6 miles from Best Western Atlantic Hotel

Can clearly cater to all types of customers whether it be for individuals on business or families staying. Staff go beyond their duties to help you enjoy the stay even recommending places to go in the area and helped with hire car rental. The room was well furnished and cleaned to an excellent standard.
I would highly recommend the stay and I will be returning.

This review is the subjective opinion of a Tripadvisor member and not of TripAdvisor LLC.
TJM1
England
1426
Reviewed 26 November 2018
DO NOT STAY HERE

Don't stay here, use one of the many other hotels close by

Thank you for your email giving us feedback regarding your stay.

In future, if such problems occur, could you report the issues to reception’s attention straight away and the utmost will be done either to move or upgrade you into another bedroom.

The noise caused by other guests in the corridors at night is very difficult to police, but when such noises are reported we do the upmost to bring these issues to the guests causing such noise with a view to have a stop as disturb other guests.

Report response as inappropriateThank you. We appreciate your input.
This response is the subjective opinion of the management representative and not of TripAdvisor LLC
lindamN4257SE
2220
Reviewed 25 November 2018 via mobile
Appalling hygiene

On a visit to the best western hotel with our family we had three rooms as we were visiting family our daughter pulled back the sheets to get in her bed and the bed sheets hadn’t been changed there was foundation, glitter and eyelashes on the sheets,when removing the sheets the mattress toppers underneath were so discusting with stains made her feel physically sick. We all checked our bedding and although not as bad as our daughters linen our mattress topper also had horrible staines .After reporting this to reception was told she was sorry but there is no management available,as to another visit to this hotel we would not be coming back .Advise to any other visitors check your beds when you get there before you decide to sleep.

Thank you for your email giving us feedback regarding your stay.

I will re-group with housekeeping department with regards to your observations about cleanliness.
In future, if such problems occur, could you report the issues to reception’s attention straight away and the utmost will be done either to move or upgrade you into another bedroom.

Report response as inappropriateThank you. We appreciate your input.
This response is the subjective opinion of the management representative and not of TripAdvisor LLC
Allie Y
2
Reviewed 23 November 2018 via mobile
Best Western Chelmsford

Terrible service from the staff here which resulted in myself being charged double for my stay and the staff not willing to help me to rectify. Staff lied and stuck up for each other and were damn rude. Ontop of this my room was dirty and had cobwebs. I’d avoid this folks and stay somewhere different if I was you!! Terrible.

Thank you for leaving your feedback on trip advisor. This platform also enables companies to respond to the feedback so that all can have an understanding what actually happened.

At the time of your check in, I was by Reception and witnessed the check in. My Receptionist greeted you and went through the check in procedure. At this stage you were refusing to give your credit card for pre-authorization which is a policy that most hotels adhere to. My Receptionist was calm and sympathetic towards you but at the same time insisting that we needed a pre-authorization of a credit card. Eventually you agreed to have your credit card Pre-authorized and when my Receptionist informed the location of your bedroom in the first floor, you became very abrupt and insisting that you had requested a ground floor room. My Receptionist showed you a copy the reservation you have made and there no requirements for a bedroom on the ground floor. My Receptionist , explained that we offer a complementary service of delivering luggage to the bedrooms and we could not move to another room because the hotel was full.

At this stage, you kept challenging the Receptionist, so my Reception Manager came to the Reception desk and explained again the policies and the booking in question. My Receptionist assisted you by taking your luggage to your bedroom.

You had two reservations for 2 rooms via Booking.com: one for Tuesday and one for Wednesday.

You were unhappy about all of the above, so decided to cancel the reservation you had for the next day. however when you cancelled it fell after the cancellation policy, so a charge was applied.

You phoned Booking.com and the hotel several times to complain about the cancellation charge.

The cancellation charges are explained clearly in the booking.com site.

Every time that we have some feedback we investigate and respond in the appropriate manner.

Thank you again for your feedback.

Report response as inappropriateThank you. We appreciate your input.
This response is the subjective opinion of the management representative and not of TripAdvisor LLC
Mike C
31
Reviewed 16 November 2018
Disappointing one-night stay

Booked one night, last minute to visit a friend in the local hospice. Phoned ahead to explain it would be a late check in. Arrived just before midnight.

The night receptionist was cheerful and handed over the key. When I tried to get the WiFi I kept getting DHCP errors. About the same time my wife couldn't get the TV to work.

Went to reception and the receptionist was able to log me onto the WiFi network. He agreed to come and sort the TV, which he failed to resolve.

When he went I got logged off the network again. Clearly the network strength was very bad in the room.

I gave up on the WiFi even though I'd been travelling all day, 300 miles, and had lots of work emails to check.

On examining the TV I found a Skybox behind the screen which was turned off. Turning it on gave us a signal but there was no remote control to work the box. The default channel was in the 900s. Has anyone worked the channels one by one using the box "controls"? Not too easy.

On checking out the next morning I politely complained to the receptionist, asking for a discount on the £130 room rate. She apologised but said she couldn't do anything and I should contact her Regional General Manager, Ricardo Santa-Rita, and gave me his business card. They must get through his cards quite quickly.

Two emails and still no reply from Ricardo Santa-Rita. Lives up to his reputation but not his LinkedIn profile:

"Having worked in some of the leading Hotels in London, given me the experience, ability and confidence to take on any challenge within the Hospitality Industry.

A versatile, analytical and hardworking individual with a practical Hands-on approach, who always perseveres to achieve the best results"

I won't be recommending the Atlantic Hotel and I think I'll give the Rose and Crown a miss too.

Thank you for your review. It is our aim to give everyone a positive experience.

Firstly I would like to apologise for not having written to your emails, but I seem to have not received these.

I share your frustration if the Wifi Network had not been working for you as I understand the importance of such functionality. my IT team constantly monitor the networks and react to any problems that may occur straight away.

With regards the TV functionality, we do encounter sometimes some challenges when previous guests insert their HDMI leads into the TV which causes the TVs to loose its tuning.

My team are instructed to hand out my card with view for guests to write to me and in turn I respond to the queries, complaints and make a decision accordingly. As explained above, I seem not to have received these emails.

I would be happy to welcome you to the hotel once more, on a complementary basis to give you a true experience on our hospitality / product.

My apologies for not delivering your expectations.

Report response as inappropriateThank you. We appreciate your input.
This response is the subjective opinion of the management representative and not of TripAdvisor LLC
View more reviews
PreviousNext
1…171819…