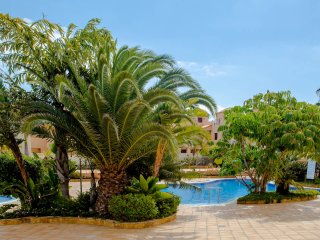 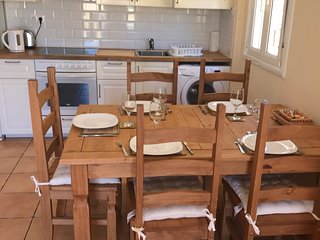 Very good - based on 37 reviews
Write a Review

First of all for what we paid we had a good week but i would rather have paid more and had better quality. We were met on time by the owners agent who showed us into the apartment, first thing was the main room light was not working and then both bedside lamps not working but he said he would come back the next day to sort them and he did. Clearly they were not checked whilst the apartment was handed over from the last renter.
Then with the position of the safe in a corner on the bedroom floor i was unable to even read the instructions unless i actually lay on the floor and again had to ask for the agents help in getting it to work, why this is not secured into the wardrobe wall i do not know.
During the week we tried to use the toaster and iron and both of those were broken, we did not report it to the agent until we left as it seemed like we were just making a nuisance of ourselves.
My wife dropped something behind the bed settee and when we moved it to retrieve it we found a mountain of dust that clearly had not been attended to in a long time.
The shower room extract fan was not working and this is causing black marks on the coving, the toilet would not flush unless you held the button in throughout the flush. The cleaning to the communal stairs outside the apartment was not done in the week we were there, the dust in the corners and on the stairs was evident, cob webs and filthy emergency lights showed that no work was done here for a while.
We had a warning about the ants in the apartment when we arrived but after the 3rd day could not leave any food in the cupboards or on the work tops due to the problem and resorted to storing food in the fridge which was not really acceptable.
Good points were a super balcony with all day sunshine, a handy BBQ, good Internet in the apartment once we had paid for it at the local office, we were able to get internet TV with a fire stick as there were no UK channels at all on the TV in the apartment. The apartment is in a good position for the sand dune beaches and local shops. It has 2 nice on site pools and in general was very quiet all week.
A taxi from just across the road was €3-50 into town.
It seemed to us that the agent has let the owners down a little with not checking that basic things like the lights and cleaning are up to standard.
Overall we enjoyed our week in Fuertaventura.

My first time in Canary Islands, and we had an excellent stay in this apartment. Easy to travel all over Fuerteventura with a car. The water in the pool was a bit cold (it's March!), but we enjoyed swimming in it. The terrace with bbq was awesome! Made a lot of steaks there. Jim greeted us, showed us everything we need. Later met him at Clarkies bar at poker night :) Apartment is spacious. Wifi could use an upgrade. Even though we paid for it - it was still working very slow.. Other than that - excellent! Would love to stay here again!

Stayed in this apartment in februart and would highly recommend. Accommodation was excellent, has all amenities and lovely bbq area on the balcony. Everything is close by and the beach is only a 10 minute walk away.

Great Location, lovely walk down to the beach, lots of lovely restaurants near the seafront. Apt in excellent location, with local shops and nice bars across the road. Went with my mam and sisters had a really lovely relaxing time. Well worth a visit.

Looking for a place to stay in Corralejo?
View all 553 holiday rentals