Just back on 18/6/14 from a weeks holiday at this lovely hotel. Can't speak highly enough for the whole holiday experience. Great choice of food (especially as I am Coeliac) nothing was too much trouble for the staff. Exceptional reception staff and waiting staff and room kept immaculately clean on a daily basis with towels also changed daily. Would recommend this hotel to anyone.

Room tip: we stayed in annexe room and had a lovely view of the mountains and also quiet
See all 931 reviews
Payments made by partners impact the order of prices displayed. Room types may vary.
Nearby Hotels 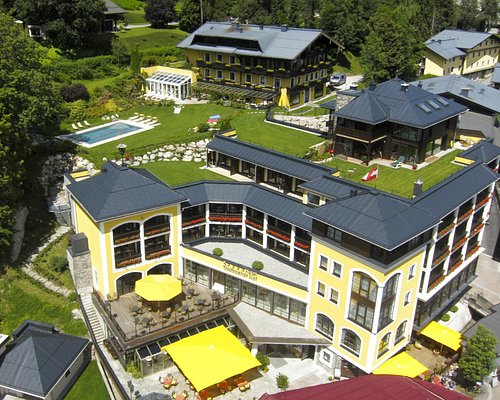 Breakfast included
Saalbacher Hof
US$204
Booking.com
View deal
Free cancellation
Hotels.com
US$196
Expedia.com
US$196
Priceline
US$214
View all 17 deals from US$196
649 reviews
0.0 miles from Berger's Sporthotel
We compared the lowest prices from 17 websites 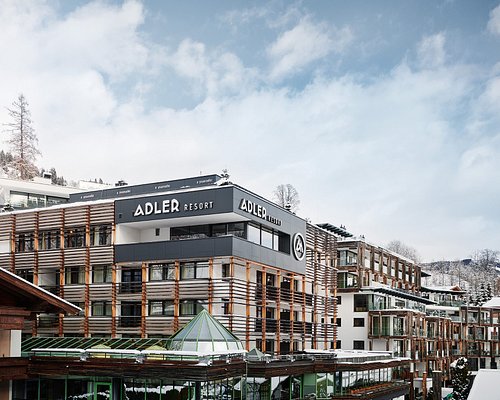 We stayed in March 2014 for a ski holiday. Prior to arriving I e-mailed the hotel requesting a quiet, high floor room. Upon arrival we received a warm welcome from Frau Berger and her daughters and was given 2 room keys to go and view. We chose the room on the front facing the road on a high floor. The room was comfortable and spotlessly clean with TV, hairdryer and usual amenities and the bathroom always had hot water. There was some noise from the road in the early hours due to inconsiderate people shouting but this is not the hotel's fault.
The location of the hotel is perfect, near either of the lifts, shops and bars. The table dance bar is really not a problem, we never saw anyone go in or hear anything from there.

Food
Food was excellent, my wife is vegetarian and she had a different tasty and inventive meal every evening which makes a change from other European countries. The salad buffet was amazing and deserts too good to miss. The hotel also organised a birthday celebration whilst we were there which was a nice touch.

Bar/restaurant area
A lot has been said about the décor of the bar/restaurant but we thought it was querky and interesting and different from the norm. The bar opened late and had entertainment on. Elvis was on one evening which was good fun and also a singer called Spacey who we found very entertaining, We had some great evenings in the bar. Staff were friendly and helpful and had a great sense of humour.
Prosecco bar was a lovely area to relax and is really comfortable.

Spa
My wife and her friend spent an afternoon in the spa which they said was nice. Only down side was the massage. The masseurs didn't speak much English and therefore the girls didn't get the type of massage they wanted, one was too hard and the other too gentle! they were also not told to pay by cash so had to go back up to the room for money so if you haven't budgeted for this and wanted to put it on a credit card it was too late.

Staff
Staff were all friendly and helpful and although Frau Berger does appear at first to be a little abrupt, once you spoke to her she was friendly and took pride in making her hotel a nice place to stay. She runs a tight ship and it shows as everything runs smoothly.

My only word of advice to Frau Berger (which is only a helpful suggestion) is to improve the front of the hotel as it doesn't reflect the inside. Get rid of the pictures of food, the plastic signs and change the covers on the tables outside as the pattern is unfortunate as it looks like a stain which makes them look dirty (which they are not) and may put people off sitting outside. You have a wonderful hotel but the outside lets you down and I would hate for people not to see past this!

This review is the subjective opinion of a Tripadvisor member and not of TripAdvisor LLC.
David T
Congleton, United Kingdom
1712
Reviewed 26 June 2014
Good value and friendly hotel

Stayed for a week (4-11 June, 2014). Located in centre of Saalbach. Had booked cheaper room in annexe but we were allocated a room in the main hotel. Room fairly small but very clean with good maid service, comfortable bed and small fridge for food and drinks. Only downside was limited view from balcony. Staff very friendly and helpful. Good food. Nice spa area and good free massage.

Enjoyed excellent walking in Saalbach area with spectacular views from neighbouring peaks. Worth another visit.

Room tip: Balcony of Room 216 faces directly on to hotel next door and view down valley to side is partly obscured by adjacent balcony.
Ask David T about Berger's Sporthotel
Thank David T

This review is the subjective opinion of a Tripadvisor member and not of TripAdvisor LLC.
kat2730
wigan
31
Reviewed 24 June 2014
Great week at Berger's Sport Hotel

Just arrived back from a stay at the Berger. We went with a couple of friends and we had a lovely relaxing week. Staff were all very friendly and helpful .food was good and plentiful. The bedrooms were fine with a very comfortable bed, bathroom and shower great with plenty hot water and towels
etc were changed daily and there was a fridge to keep wine and water cool. We had a double balcony which we shared with our friends so it was great to have a drink and watch the sun go down.The spa offers a free massage and I can recommend the back massage it was the best I have had.,We had a great time with lots of walks for all levels, stunning scenery,a good bus service to get to see other places and we met lots of lovely people, even the weather was kind to us.

This review is the subjective opinion of a Tripadvisor member and not of TripAdvisor LLC.
S00Bee1949
Atherton, United Kingdom
2520
Reviewed 24 June 2014
Good and bad in this hotel

I stayed here with my husband and friends on the 3rd of June this year for one week. I have to say that the staff worked so hard at making our stay a memorable one, but the hotel is a little dated. The rooms are fine, the bed is the best I have ever slept in on holiday and even has lovely soft pillows. The breakfast/salad bar area is so small only one person at a time can fit in. Generally the food was fine. I can't say I would stay here again, but at the right price etc you never know. I would say go and see for yourself but be warned the weather was very hot even at the beginning of June, read the weather info the week before you travel..

Room tip: The rooms at the back of the hotel look directly onto the rooms of the hotel next door, this was only about ten feet away from our balcony. Try and book a room at the front as the hotel is in a pedestrian zone.., so no problems with heavy traffic.
Ask S00Bee1949 about Berger's Sporthotel
Thank S00Bee1949

This review is the subjective opinion of a Tripadvisor member and not of TripAdvisor LLC.
Howard P
Liverpool, United Kingdom
23
Reviewed 21 June 2014
southport fell walking club"s annual trip to austria

i have been going to austria for the last 14 years,with friends from the southport fell walking club,hotel bergers is the best hotel we have stayed in,what a great hotel! staff food you name it! and great walks and a good buss service to get you to lengu or zell am see.

This review is the subjective opinion of a Tripadvisor member and not of TripAdvisor LLC.
View more reviews
PreviousNext
1…626364…
<script type='text/ja