CheapTickets
Expedia.com
Hotels.com
View all 13 deals
Prices are provided by our partners, and reflect nightly room rates, including all taxes and fees known to our partners. Please see our partners for more details.
Payments made by partners impact the order of prices displayed. Room types may vary.
TrevorB
Kingston upon Thames, United Kingdom
278299

This hotel is amazing!
How can anything this bad not have been bulldozed?
I'm amazed!
Grim. Awful. Dirty. Noisy. Crass. Nasty.
All adjectives that fail to describe how bloody GRIM it is!
Rab C Nesbitt would love it.

Trip type: Travelled as a couple
See all 1,042 reviews
Payments made by partners impact the order of prices displayed. Room types may vary.
Nearby Hotels 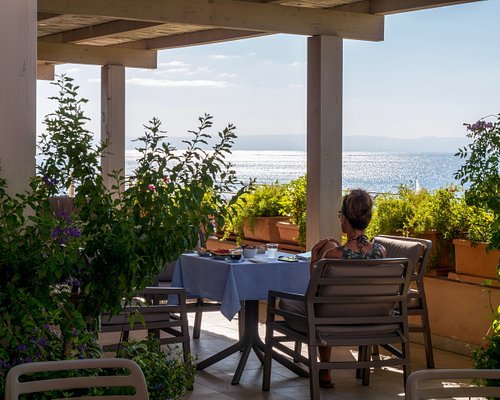 Expedia.com
View deal
Hotels.com
B&B.it
US$62
Travelocity
View all 11 deals from US$62
192 reviews
2.0 miles from Club Esse Roccaruja
We compared the lowest prices from 11 websites

The staff at the hotel were very enthusiastic when attempting to be helpful, but unfortunately, none of them were able to communicate in English. Apart from the enthusiasm, everything very much went downhill from then.

Starting with the quality of the rooms, to the pool, to the food - it was certainly not a 4 star hotel. It was probably 2 star, perhaps 3 star at best.

The room did not have a kettle, they charged 3 euros for the bottles of water in the fridge. The breakfast was comprised of toasts in packets, small capsules of jam, heavily watered down juice and slices of sticky salami/ham and cheese.

The hotel itself lacked atmosphere. It was practically empty for mid-June and terrible music was always blazing away in the lounge area, even when no one was listening.

The rooms were very average. The beds were quite comfortable (two twin beds stuck together to make a double) and the view was nice. However, they turned off the air-con, even though they advertised the rooms to be air-conditioned!!! The hot water came out a little yellow and the walls were extremely thin.

Poor hotel and would not recommend.

This review is the subjective opinion of a Tripadvisor member and not of TripAdvisor LLC.
Peter5555Lincoln
Lincoln
1531
Reviewed 2 September 2012
confidence trick - reassuringly expensive!

I only normally comment when something positive to say (see my other reviews, also stayed at hotel catalunya alghero and smeralda beach baia sardinia on same trip)) but this dump requires negative comment. Very dilapidated, not very clean, altogether neglected. We paid 190 euros per night b&b and were sent to room in conference centre at the back. We insisted on sea view room in main hotel. Big mistake. All rooms have sea view but are north facing of necessity, thus no sun on balcony. Room shabby but ants in the bed really sorted us out. We moved next day to the annexe conference centre - very nice room. Except for the nearby open air rave drum and base disco pounding out until 4.00am - owned by the hotel apparently so this is a good indication of their interest in their guests' welfare.
In fairness the staff were excellent, showed us different rooms and tried to be helpful. They were exremely professional but you could tell they knew we were being ripped and were embarrassed. I'm pretty sure the place had been bought out by some sort of investment company for development but then put on the back-burner because of recession. Meanwhile, they try to milk top rates from mugs like us through Booking.com.
The place was full but with some sort of tour groups or clubs. Seemed a bit like a miners' welfare centre (no disrespect) but clearly weren't paying the hotel's published rates.
not possible to refurbish, just bull-doze.

This review is the subjective opinion of a Tripadvisor member and not of TripAdvisor LLC.
Amy G
Cambridge, Massachusetts
63
Reviewed 23 August 2012
Great place to stay and right on water

While the outside looks a bit like an old Soviet building, rooms are comfortable and clean with good A/C. This is actually very important as the month of August is unbearably hot in Sardinia, especially from 1-6 PM each day. So you'll need a place to take some refuge from heat. Go for B&B deal and check out some of the great local restaurants for great dinner/lunch options.

Room tip: As for room on the 3rd or 4th floor with an ocean view.
Ask Amy G about Club Esse Roccaruja
Thank Amy G

This review is the subjective opinion of a Tripadvisor member and not of TripAdvisor LLC.
solPennsylvania
Pennsylvania
22
Reviewed 24 September 2009
Not worthy

The hotel was sold to us as a 4 star hotel. It is NOT. Maximum you can give 3 stars. The grounds are not taken care. We stayed in the room outside the main complex, and it was pitiful. Doors did not close properly. There was a terrace with broken chairs and the light outside was not working. Not very clean. As simple as you can find in a 2 or 3 star hotel. We only bought breakfast instead of the whole full meal package. For this reason, you could not seat in the nice tables. We were told to sit in a corner with no views. The coffee was instant coffee (never seen this in a country like Italy). The hotel beach is a joke. It was a waste of our money.

This review is the subjective opinion of a Tripadvisor member and not of TripAdvisor LLC.
dynham
Harpenden, United Kingdom
2921
Reviewed 19 May 2009
Great location on the best beach ok for a short break

Our favourite beach in Europ with limited places to stay hotel isnt bad would stay again with the right deal. Nothing flash but nice staff on the beach has a bit of charm about the place. I don't think it's had a redec in yrs but go on the premise that's its a 3 star hotel we had a lovely holiday there so don't worry

This review is the subjective opinion of a Tripadvisor member and not of TripAdvisor LLC.
View more reviews
PreviousNext
123…
<script type='text/javascript' crossorigin='anonymou