“A Little Gem”
QVg0XzI4X0hZTg==
other travellers have booked this property 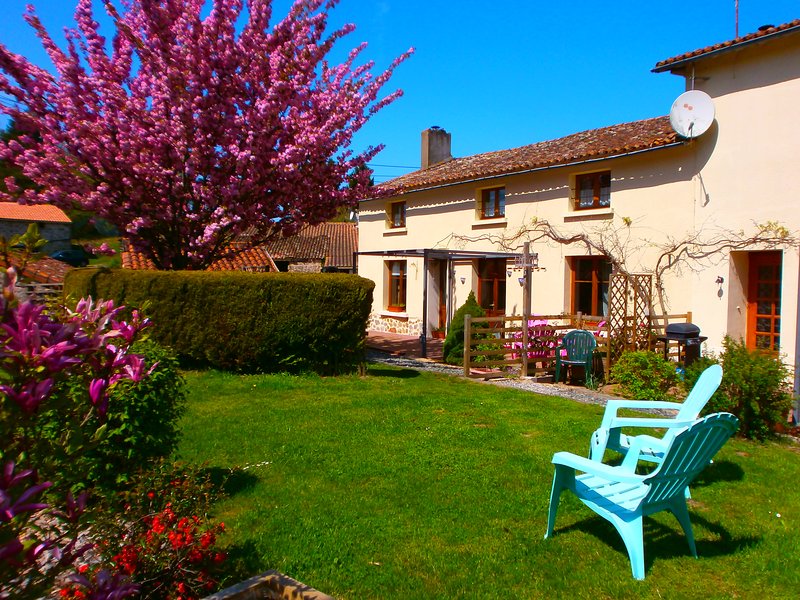 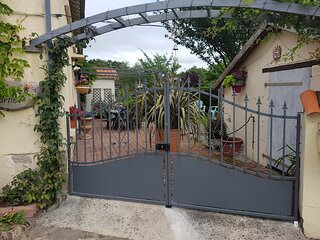 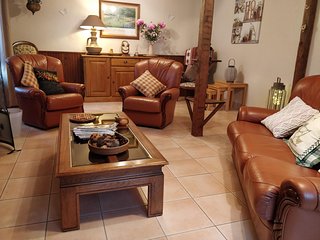 Excellent - based on 24 reviews
Write a Review

Rarely does a holiday let exceed expectations but Eeyore's Corner does in every way.
Charming characterful property in the heart of the French countryside, maintained and equipped to a very high standard and spotlessly clean with bags of chic French rustic charm thrown in!
Wonderful secure enclosed patio area with stone barbeque - ideal for us as we have two young children under 5. Splash pool and hot-tub in the idyllic larger garden area which leads down to the river side where you can sit and enjoy a picnic or "refreshment"!
The owners live next door and couldn't have done more to ensure we enjoyed our stay and had lots of suggestions and advice for us on our first trip to France.
Walking distance to Le Tallud with a restaurant and a couple of shops. Nearby Parthenay is the most wonderful, atmospheric medieval town. We were there during their annual FLIP festival with games tents and tournaments throughout the town for all ages. Our kids had a ball and we couldn't drag them away from the bouncy castle enclosure. Loads of live music and a wonderful choice of excellent restaurants and cafes. Our last night coincided with Bastille Day and the town really push the boat out with fireworks and bands till the wee small hours...
Eeyore's Corner is the perfect setting for a relaxing, restful holiday as well as being in the perfect location to explore the region if you can manage to tear yourself away from the cottage!

Date of stay: July 2013
Liked best: Everything!
Liked least: Leaving
Travelling group: Young Children
Would you recommend this hotel to a friend?   Yes.
Recommended for:
Was this review helpful? Yes
This review is the subjective opinion of a TripAdvisor member and not of TripAdvisor LLC
Thank you for your lovely comments, we strive to please.
Good luck with your future endeavors and we hope to see you all again in the future.
Regards
Dave & Jilly
This response is the subjective opinion of the management representative and not of TripAdvisor LLC
Problem with this review? Thank you. We appreciate your input.

Gravesend, United Kingdom
Reviewed 5 October 2012 for a stay in September 2012
Date of stay: September 2012
Liked best: Peaceful location.
Travelling group: Spouse/Partner
Would you recommend this hotel to a friend?   Yes.
Recommended for:
Was this review helpful? Yes
This review is the subjective opinion of an individual traveller and not of TripAdvisor LLC nor of its partners.
Problem with this review? Thank you. We appreciate your input.

Spalding, United Kingdom
Reviewed 23 September 2012 for a stay in September 2012
Date of stay: September 2012
Liked best: The whole thing
Liked least: The hornets in the evening and a missing fan in the bedrooms as you cannot sleep with windows open . Closing the windows made it very warm at night time.
Travelling group: Extended Family
Would you recommend this hotel to a friend?   Yes.
Recommended for:
Was this review helpful? Yes
This review is the subjective opinion of an individual traveller and not of TripAdvisor LLC nor of its partners.
Problem with this review? Thank you. We appreciate your input.

Hastings, United Kingdom
Reviewed 28 August 2012 for a stay in August 2012
Date of stay: August 2012
Liked best: All, there was nothing not to like.
Liked least: Nothing, there was nothing not to like.
Travelling group: Young Children
Your age range 35-49
Would you recommend this hotel to a friend?   Yes.
Recommended for:
Was this review helpful? Yes
This review is the subjective opinion of an individual traveller and not of TripAdvisor LLC nor of its partners.
Problem with this review? Thank you. We appreciate your input.

1 helpful vote
“A very awkward stay, cannot recommend, don't expect your deposit back.”
Reviewed 19 August 2012 for a stay in July 2012

We stayed for two weeks in the summer, looking forward to precious family time, with our young kids, visiting parents and friend. While the house is very nice the circumstances were not. The advertisement for the house said that the owners lived in the adjoining house. We accepted this but assumed it wouldn't be a concern. We were so wrong.

Firstly,the garden, stream, pool is actually in the owners garden, so it feels like imposing on their space to be there. We always felt we needed to chat and certainly had no privacy in enjoying this space. , We had a small fenced off garden which we assumed would be our own, but continuously we'd come outside to find the owners fussing about in the shed, garden or jacuzzi, even first thing in the morning when we were still all in our pyjamas. It became more awkward over the time we stayed, as they continued to pop in, borrow things, monitor our movements and the way we were doing things about the house (including asking why we were washing our sheets - a matter we'd consider our own).

In advance of our visit we had asked if we could have a visiting friend stay for a few nights (there are 8 beds, we were 6). They agreed but when she arrived they were nothing but rude to her. They continued to impose themselves and when our friend was quietly reading in our own garden space, Dave (as usual fussing around in our space) said to her "Are you shy or something? Why are you so damn ignorant then?" and started a tyraid (and again later when we tried to discuss it) about how she was being rude for not talking to them, that they felt like "the help". It was really shocking for us all, I've never known such rude behaviour. They attempted an apology later (the kind without saying sorry) but it was just too much. We were very embarrassed for our poor friend who had come as our guest.

We tried to keep a balanced end to things, despite things, assuming perhaps that the owners considered if more of a "home stay" than a private gite. However, once we were home we were again disappointed when they emailed to say we had apparently soiled a mattress beyond repair such that they needed to replace it. We were shocked (they had deduced that our sheet washing was something to do with this, which it didn't at all). They would provide no photo evidence to back up these claims and our objections fell entirely on deaf ears. We felt powerless to do anything and indeed, nothing could be done so we lost 35% of our deposit. A very bitter end to a very disappointing holiday.

Date of stay: July 2012
Liked least: The owners and their behaviour towards guests
Travelling group: Extended Family
Would you recommend this hotel to a friend?   No.
Was this review helpful? Yes
This review is the subjective opinion of a TripAdvisor member and not of TripAdvisor LLC
Inconsiderate and irresponsible guests.
We as the owners of Eeyores corner provide a clean and welcoming environment for your holiday and we have to maintain the facilities which would include the hygene of the hot tub and the splash pool.
When guests arrive we show them the terms and conditions of Eeyores corner which they sign and a copy is left in the property as a reminder of their responsibility.
HOW EVER
If you think that urinating a perfectly good bed mattress by a 2 year old when a cot was asked for and provided, and not used and the guest tries to dry the compromised mattress at length , is acceptable ,then I am on a different planet. Mattress protectors are provided but in this instance was not required as the child should have been in the cot which is protected.
When fresh bed linen is put on the line 2 days after their arrival, you know mattresses have been compromised, which was denied by the guest when asked . hence the deduction from there security deposit. As we were not given the opportunity to try and resolve the problem.
One of the rules is that the Hot tub which is for hydro therapy is not to be used as an extension to the splash pool for the children to play in.
So if you think that it is acceptable for a young child to urinate in it and to play in it with their cloths on!!!!!!!!!
As for going into the out building, this is required as we give a service to clear the copious amount of Bottles plastic and glass and card board to take to the recycling center. The more that is consumed the more visits we must make. And we do this with a good heart.
Our guests also asked if it was possible for a friend to visit for a few days knowing that we only advertise for 6 persons all be it there is sleeping arrangements for 8 as different parties require different sleeping arrangements and they had already reached their quota, however to show good will we agreed that their friend could stay for a few days.
However our good will was abused as this visitor stayed for 4 day’s without introduction and used all facilities free of charge without a thank you or by or leave, basically having a free holiday.
We do not accept rudeness.
It expressly indicates in the advert, that the owners are on site and that guests have the use of the bigger garden for fishing and relaxing but it is not part of the rental agreement for the accommodation. This is given freely so guests can enjoy greater scope for their holiday.
It is of great disappointment that these are our first guests , that did not take responsibility for their conduct. Our other reviews speak for us.
This response is the subjective opinion of the management representative and not of TripAdvisor LLC
Problem with this review? Thank you. We appreciate your input.

sidcup
Reviewed 17 July 2012 for a stay in July 2012
Date of stay: July 2012
Liked best: The owners friendliness, the hot tub and the peaceful river setting.
Liked least: Going home.
Travelling group: Spouse/Partner
Would you recommend this hotel to a friend?   Yes.
Recommended for:
Was this review helpful? Yes
This review is the subjective opinion of an individual traveller and not of TripAdvisor LLC nor of its partners.
Problem with this review? Thank you. We appreciate your input.

Date of stay: August 2020
Was this review helpful? Yes
This review is the subjective opinion of a TripAdvisor member and not of TripAdvisor LLC
Problem with this review? Thank you. We appreciate your input.
Previous Next
1 2 3 4 5
Updating list...
Do you own a holiday rental? List it here.

Looking for a place to stay in Parthenay?
View all 15 holiday rentals