We are staying in Villa Eva a luxury 2 bedroom villa with pool with 2 friends.
It is a beautiful location, set back a little from the road and beach but with gorgeous views from our huge windows. When I say set back it is about 30 steps from the beach!
The rfesort is new (about a year old) and so the rooms are still new and huge! Even an 'ordinary' room is a suite with large sitting room and separate bedroom, with inside and outside shower. These rooms, nine of them are situated around a large oval navy blue pool and all have a sea view.
There are a few very informal restaurants right on your doorstep and the prices are so cheap for good class Thai food. If you are looking for an away from it all beautiful island with stunning scenery and plenty of water activities plus R&R, look no further. Look at tie website Villaguna-residence and you will find all you need to know. Email Raymond or Nadine and enquire about special deals - they will look after you!! Nothing is too much trouble.More

Show less
Room tip: All have A/C and all have a sea view. The suites nearest the road are a little noisier with motorbikes so ask for one a little further back . The one and 2 bedroom villas have their own pool
See all 302 reviews
Payments made by partners impact the order of prices displayed. Room types may vary.
Nearby Hotels 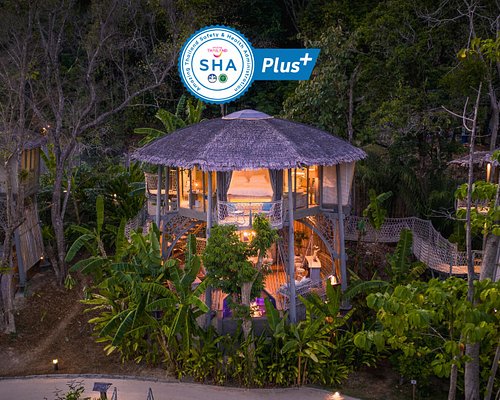 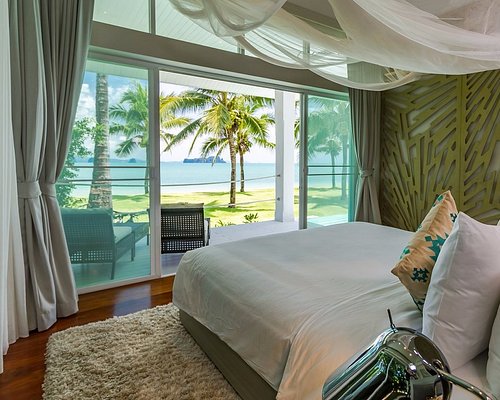 Official Hotel Site
View deal
Hotels.com
US$510
Expedia.com
US$510
CheapTickets
US$510
View all 9 deals from US$225
126 reviews
0.6 miles from Laguna Villas Yao Noi
We compared the lowest prices from 9 websites 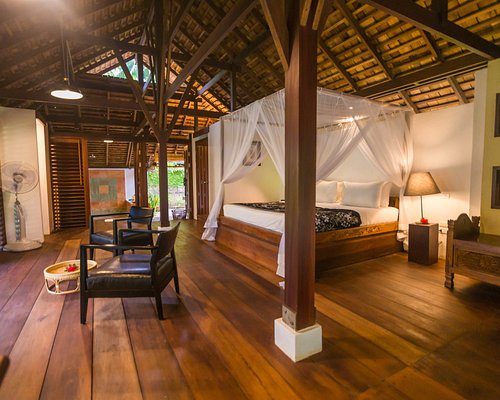 Firstly, to discourage any '6/7 star hotel and facilities to match' wishers, this is not a hotel that will cater for your every luxurious whim and desire. We stayed in Phuket for 3 days and here for 3 days but i regret staying in Phuket now, if only i had known about this place! The Island of Koh Yao Noi is very small and relatively untouched to the tourist masses so anything like a 'chain' hotel would just spoil it. What Villaguna is, is an extremely well appointed residence to stay and relax, enjoy the views, and the peace and the quiet matched with glorious views of the bay and surrounding islands. It is ran by a lovely couple with that 'personal' feel and 'back to nature' style that many enjoy - we definitely did! There is a bar a 1 minute stroll from the accommodation that has the most sublime array of dishes to cater for everyone's tastes. I tried nearly everything on the menu and wasn't disappointed in the slightest! (i'm a fussy eater!) The villa itself was far too big for just me and my girlfriend but, for the price, was more than what we could have hoped for! Very modern facilities considering the isolated island location. The owners are on hand to aid you in anything you want, bike hire, scooter hire, boat trips etc (if he asks you to join him on his boat - do it! - Amazing experience!). You can also hire a long-tailed boat to the nearby islands so its a great place to explore from, and to come back to and relax. I also recommend hiring a scooter and exploring the island until the roads run out! To sum things up, you get well appointed and modern accommodation on an island that of jungle and beaches, it is an untouched paradise which is hard to beat! I will definitely return, cant wait to go back!

Room tip: Villa's are BIG! If its just two of you, unless you have 10 cases of luggage go for the rooms around the pool! If your a group of 4 or more, or want to indulge in luxury and space, take one of the Villa's!
Ask adbaker1234 about Laguna Villas Yao Noi
2  Thank adbaker1234

This review is the subjective opinion of a Tripadvisor member and not of TripAdvisor LLC.
alan2301
Sydney, Australia
1027
Reviewed 20 January 2013
Villaguna is not a hotel

We stay at Villaguna for 6 days. There are has a beautiful view but swiming pool is too small, no hotel facilities. Absolutely it's not worth to pay that sort of amount for this hotel. What are you expect when you have to pay more than $200 US for low season or $300 US for peak season, expectially in Thailand.

This review is the subjective opinion of a Tripadvisor member and not of TripAdvisor LLC.
JohnAndJess F
Grenoble, France
22
Reviewed 10 January 2013
Great rooms, Peace and Quiet

We went to Villaguna residence for our Honeymoon, we stayed a week in a big villa front of a large swimming pool !
The bay view is superb, we also recommend to visit the island of koh yao noi and make a trip to the islands nearby. The owners have organized everything for us and we spent a very pleasant stay.

This review is the subjective opinion of a Tripadvisor member and not of TripAdvisor LLC.
AlexTara
Singapore, Singapore
186186
Reviewed 4 January 2013
Unspoilt Thailand with friendly host

We were pleased with our stay in one of the 2 bed villas. The view from the villa is great and the furnishings are modern and clean. The host Nadine together with her dog sushi were very welcoming and always willing to help. Very few places on the island take credit card however Nadine was willing to arrange for us and take the money later by credit card (they do charge 3% to pay with card though).

Well worth hiring a long-tail boat to visit some of the nearby islands. The food at the local restaurant is good quality and reasonable value. Other bars to the right of the hotel offer good views too.

If you would like to experience what Thailand was 10-15 years ago then this island is for you. Villaguna offers some luxury on what is otherwise a fairly rustic island. We will be back!

When we discovered an infestation of maggots in our villa, the management didnt react kindly at all. They were almost in denial and eventually abruptly encouraged us to leave our 2 night stay early! Upon investigation in the area, the management has a bad rep for their customer service...
Let me explain.... We decided to stay here as it was our honeymoon and the end of a long 6 week trip. We got the room at half the price as we turned up. Everything seemed pleasant until late in the evening, my and my wife discovered an infestation of maggots around bedroom and the loung area, bathroom. Annoyingly, the reception area closes at 6pm, so I was forced to clean up the maggots myself as we really couldn't go to sleep. The maggots were there as the room had not been thoroughly cleaned, you could see lots of dust and dirt around that had obviously been there for weeks, months even.

I complained to Nadine the french owner in the morning and she wasnt apologetic at all. She promised the room would be throughly cleaned after I showed her the dirt and dust. I really expected more from a premium resort.
We went off for the day and came back to find that the room had not been cleaned properly and found dead maggots in the corners. I went back to the owner, who was again unapologetic. the manager sent the cleaners in again. Nadine, the owner, followed and basically said the maggots were "the cause of nature" and that if we werent happy "its best that we leave". We couldnt believe our ears! leave? how about an apology i said. The false welcoming person that we'd met at the beginning our stay turned into a rude, arrogant lady who was too proud for her own good. It was 5pm, pouring with rain and Nadine the owner said its best we leave? where was the customer service? incensed by her attitude, we decided to leave. As we were leaving, a Swiss lady staying at the resort for a week paying twice as much as us said she was really unhappy at villa guna, the breakfast was awful, no clean towels, the list went on. it appeared we weren't alone.

we decided to find a place before we'd leave VillaGuna and went to a hotel over the road. Within minutes, they'd sent two intimidating guys demanding payment. We explained that we were told to leave and we would find a place first. We also needed to go to the cash machine but it was pouring with rain. One guy said he understood and said come and pay when the rain dies down. Eventually, we left to go the cash machine, which was a good 15 minutes by motor bike. We arrived back at our new hotel to find a threatening letter from the management of Villaguna demanding payment and the return of two dressing gowns we apparently stole!

The worse experience of my entire travelling life.

This review is the subjective opinion of a Tripadvisor member and not of TripAdvisor LLC.
View more reviews
PreviousNext
1…282930…