Nice but not best!!! - Review of Marilena Hotel

Trip.com
Hurb
StayForLong
View all 14 deals
Prices are provided by our partners, and reflect nightly room rates, including all taxes and fees known to our partners. Please see our partners for more details.
Payments made by partners impact the order of prices displayed. Room types may vary.
Lucy K
London, United Kingdom
1713

Nice but not best!!!

It is a nice hotel with a great location. Very close to the beach, few little shops and restaurants around.

It is not perfect thou... The pool is quite small and without any designated area for kids which is always nice.
Rooms are capacious with lovely bathrooms but not cleaned properly. The day we checked in we had to wipe the floor first as it was not swept or moped after the previous guests.
I am not a fussy eater so I was sure the food is not going to be an issue... And it was... From Monday to Friday breakfast/lunch/dinner we have been served not only the same food but a very bad food as well. By the end of my stay I was so fed up of eating only salad I had to dine out...

Hope that review will help you... It is not a bad hotel but there is definitely room for the improvement :)More

Show less
See all 584 reviews
Payments made by partners impact the order of prices displayed. Room types may vary.
Nearby Hotels 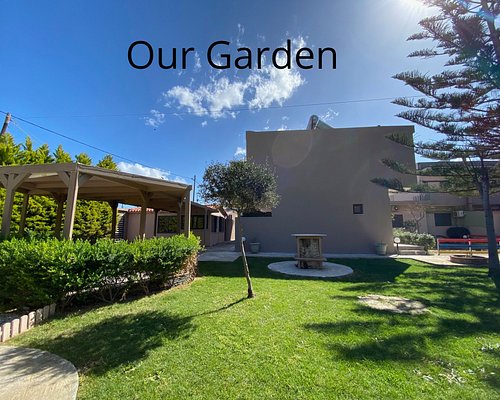 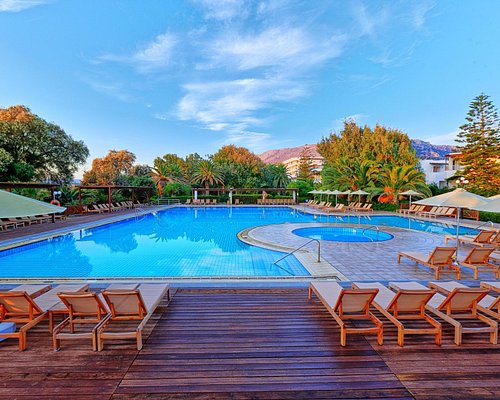 I stayed at this hotel in May 2014 with a group of ERASMUS students. We where staying in a room for 3, although there where only 2 beds and 1 couch, the room should definitely be only for two persons. The bathroom was OK, nothing fancy, but strangely only small soaps given, no shampoo. I liked the food, quite good variety. The pool is also nice but the water was too cold. When one of my friends wanted to stay at the same hotel for one more night, the price given was €60, which is way too high for this hotel. The area is quite, but not much to do at night. I would choose other region for vacation on Crete.

This review is the subjective opinion of a Tripadvisor member and not of TripAdvisor LLC.
Woolleyjumper
218
Reviewed 23 March 2014
Worst holiday ever

Booked allocation on arrival with Olympic holidays, we were given a list of 5 possible hotels that we would be stopping at so upon arrival at the airport we were a bit surprised with the name of the hotel allocated to us,never the less we have travelled to Greece on numerous occasions and had not had any bad experiences.
We arrived at the hotel early in the morning, first impressions were good, we were shown to our room and even helped with our cases, the room was big enough and clean, but the bathroom was so small you had to go in manoeuvre yourself around the toilet in order for you to close the door, there were no British people at the hotel so we felt quite isolated, the food was awful, there were flies on the desserts, this was all inclusive but we ate out every night the hotel were catering more for German and Polish people who we found extremely rude and arrogant.

This review is the subjective opinion of a Tripadvisor member and not of TripAdvisor LLC.
Jessica D
610
Reviewed 28 January 2014 via mobile
Awful!

Worst hotel I have ever been to. Definitely not a 4 star. Food was disgusting. Full of Germans. Cats and dogs roaming everywhere in the hotel. Such a run down area! Not one person spoke English there so felt very isolated. No entertainment whatsoever! The only good part was the rooms were nice and beds were comfortable.

This review is the subjective opinion of a Tripadvisor member and not of TripAdvisor LLC.
Anne G
Calgary, Canada
78
Reviewed 2 November 2013
Avoid

Agree with some other reviews, it is a warehouse for tourists, especially loads of Russians on package tours, and the 'all inclusive' food is pretty poor. Nothing absolutely terrible, but just not what you want on a holiday. Cats in the dining room, stray dogs, some aggressive, haunt the long drive up to the entrance. Staff quite helpful, but I would never go back.

This review is the subjective opinion of a Tripadvisor member and not of TripAdvisor LLC.
shaharn2013
Modiin, Israel
2930
Reviewed 21 September 2013
Terrible indeed. Stay away!

We've seen 3 types of rooms. AC didn't work, long lines at the dining room so go early even if you're not hungry!
Not clean, towels replaced once in 3 days. Cracked rusty bath, no kidding!!!
Low maintenance and it shows. Many young noisy groups running about.
Not recommended!
Food and location are ok but definetly NOT recommended, sorry.

Room tip: 3 types of rooms so don't let them send you over to the Apartments building, it has the worst rooms i've ever seen.
Ask shaharn2013 about Marilena Hotel
7  Thank shaharn2013

This review is the subjective opinion of a Tripadvisor member and not of TripAdvisor LLC.
View more reviews
PreviousNext
1…232425…
<script type='text/javascript' crossorigin='anonymous' async onerror='__scriptLoadError(this,true);' src='https://static.tacdn.com/assets/assets/CnY-mJ.8