My nephew's wedding - Review of The Old Lodge

Review of The Old Lodge
Reviewed 2 July 2017 via mobile

We stayed 2 nights at The Old Lodge. The room was magnificent with views across the grounds and an impressive 4 poster bed, with luxurious bedding and an ensuite with top class toiletries and ample towels.
Breakfast was amazing with a display of fruit juices, cereals and fresh fruit and cheeses and pastries. The hot choices ranged from full English to smoked salmon on scrambled eggs or eggs Benedict with a constant supply of toast and tea or coffee. The dinner choice was varied, excellent and top class and was absolutely delicious.
Our comfort was their main concern and each person was treated as an individual and I cannot speak highly enough about the staff. The wedding went absolutely smoothly and the organization was brilliant and we will have the best memories always.More

Show less
Trip type: Travelled with family
See all 723 reviews
Payments made by partners impact the order of prices displayed. Room types may vary.
Nearby Hotels 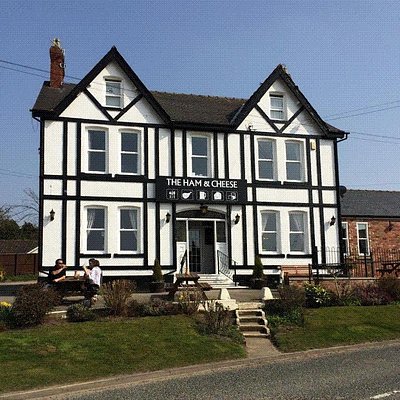 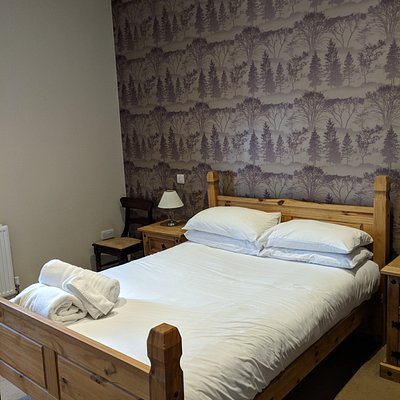 Breakfast included
The Mount Hotel Malton
US$136
Booking.com
View Deal
Free cancellation
Agoda.com
US$136
Tripadvisor
US$136
98 reviews
0.4 miles from The Old Lodge
We compared the lowest prices from 3 websites 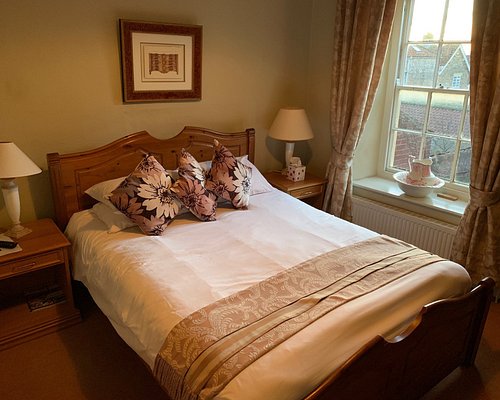 We Booked two Superior Rooms at The Old Lodge, and driving to the car park was very impressive, we were glad to have chosen it as a stop off on our way to Castle Howard for Fathers Day.

We checked in and were given rooms 19 and room 20.

We took room 20 our son Room 19 above ours. Bang crash, our door left rattling in its frame, time after time, load shouting voices? Called reception to confirm what I thought.

Room 20 is directly above the Kitchen, the Chef loves screaming at his staff and the crashing was the Fridge door which they simply slammed shut - ALL NIGHT.

Thought a Bath would help us relax. Wife started to fill the bath with cold water then added the Hot. The Hot water tap handle and the spout became red hot, turning the tap off was scolding hot. My wife then lost her footing as she pulled her hand from the tap and fell into the bath badly bruising herself in the process.

She operated the plug and then the bathrooms party trick started. The water from the Bath started to spray up into the shower!

We contacted reception, they claimed no-one had ever mentioned i and they contacted their plumber who they said was an hour and a half away. Since we had Room 19's Bath we simply abandoned the idea of relaxing.

One of the selling features are the views over the front and rear lawns. Ours was lovely until a member of staff roared up in their Lime Green Corsa VXR and parked it directly under our window. Reception later used the excuse that they could not find room on the Car Park, odd since we went out for a walk and there was plenty?

We sat out before our Evening meal. The rear lawn was picture perfect with Rabbits and Squirrels running around. We had to move inside after two inconsiderate guests sat next to us and started smoking cigarettes and a pipe and blowing the smoke all over us.

The Meal itself was very good. We ate late so the Kitchen was closed when we retired so no noise through the floor.

Breakfast, it is the first thing you learn at catering school, you can't get that wrong can you. Eggs Benedict - First attempt Hard Boiled Poached Egg - sent it back. Second attempt, the egg was lovely, the Muffin resembled a barbecue briquette.

Left without breakfast and a very bad first impression.

Hi,
After reading your numerous reviews on TripAdvisor, it does appear that you have had more than your fair share of bad experiences!
The Old Lodge is a non-smoking building, but guests do smoke outside and never do they go about blowing smoke all over other guests. I am a non-smoker and if I felt uncomfortable by someone smoking (especially blowing smoke all over me) I would simply find another seat to sit at after all our grounds are beautiful and have many seating areas!
You were quite rightly informed by the staff, we have never had a guest complain about the tap overheating on the bath let alone the water spraying up into the shower. A professional plumber was called on Monday to check the tap, bath, shower and was unable to find anything for us or any future guests to be concerned about.
Our GM spoke to the Chef regarding the noise from the kitchen, our Chef will now make every effort to call food out in a whisper and refrain from banging doors, our staff will endeavour to make her car less noisy!
the Chef has apologised that he appears to of been unable to get your eggs Benedict to your liking, they normally are quite yummy.

Report response as inappropriateThank you. We appreciate your input.
This response is the subjective opinion of the management representative and not of TripAdvisor LLC
Mel_Porche
Edinburgh, United Kingdom
12189
Reviewed 12 June 2017 via mobile
Spent a Truly excellent night here

We had an overnight stop here on our way south. The country side in this part of Britain is lovely. The small market town of Molten is really quaint. There is an historic feel to the town with some beautiful architecture.
We were delighted to find that The Old Lodge in Molton fitted well with its surroundings.

This review is the subjective opinion of a TripAdvisor member and not of TripAdvisor LLC
Sarah M
Huggate, United Kingdom
82
Reviewed 11 June 2017
Beautiful exterior, not matched inside.

Firstly, it would have been good to have been told that there was a wedding on when we booked rather than later when the cancellation charge applied. Music was knocked off at 12am as promised.

The greeting wasn't particularly welcoming or professional given the cost and overall, the quality of the interior did not equal the amount paid. This may sound picky but for the money I expect more.

The interior is tired - our 'superior room' was made smaller by large furniture with a scuffed sideboard and old fashioned TV. The bathroom was a great size but the same old carpet ran throughout. The plumbing under the sink is visible and the shower took 5 + minutes to warm up. The bath was lovely.
The ground are lovely and the location is great.

It was an ok stay - breakfast was ok, the staff were fine but there was a lack of real care to the inside and ethos towards paying guests.

This review is the subjective opinion of a TripAdvisor member and not of TripAdvisor LLC
Jamie575
Singapore, Singapore
240223
Reviewed 8 June 2017 via mobile
Lovely old lodge with grand rooms

The Old Lodge is hidden behind a tall wall. Once past the walls, the grand Old Lodge greets you.
We drove over to the entrance on the side of the building and unloaded our bags. My son helped to wheel the bags out of the rain and into the small cosy check-in area.
I moved the car into the car park at the other side of the building. By the time I got back, my wife had the key to the room and I had the honor of bringing our two luggage up two floors.
Once safely ensconced in the room, we were in awe. A queen sized four poster bed complete with canopy sat pride of place in the room. An old fashioned bathtub sat on one side of the room. By the windows on the opposite end of the room was a writing desk and chair.
A marble top table sat on the wall in between with an old fashioned closet by it. The closet has security hangers, something unusual for a nice hotel like this.
The bathroom has two sinks, a walk in shower and toilet. It is a good size. The shower stall is fairly wide and the shower has relatively good pressure.
Wifi can be received in the room and there's a flat screen tv. No fluffy slippers or bath robe, and there's no safe.
We were expected to spend some time in the bar with drinks before dinner; the proper way. Dinner was satisfactory and brought back memories of our days in college.
The extensive grounds had some rabbits roaming about and my son had fun trying to catch one. There's no gym on site.
The staff are friendly and very hospitable.
We regretted not staying longer but alas, we had to move on. It was a good overnight stay with really deep sleep. We would recommend a stay here.

This review is the subjective opinion of a TripAdvisor member and not of TripAdvisor LLC
TwoTravelers99
Round Rock, Texas
6551
Reviewed 3 June 2017
Lovely hotel and gardens

The Old Lodge is a beautiful old hotel with a very large, peaceful garden full of rabbits and beautiful flowers and old trees. All the staff were very friendly and helpful and genuinely seemed happy to see you each day.

The breakfast was very good with a nice variety of breads, cereals, cheeses and cold cuts or you could have full English breakfast. Dinner was also very good, from starters through to dessert..

The rooms in the Old Lodgings are quite large and well appointed, and it is just a short walk to the main hotel.

We really enjoyed sitting out by the garden in the late afternoon, enjoying a beverage and watching the rabbits and birds in the garden. I was very relaxing.

We would not hesitate to book a room on our next visit to Malton.